Rihanna’s man took a front-row seat at Sunday night’s Knicks game at Madison Square Garden; after he was booed by the crowd, he may have wished he wasn’t quite so visible. 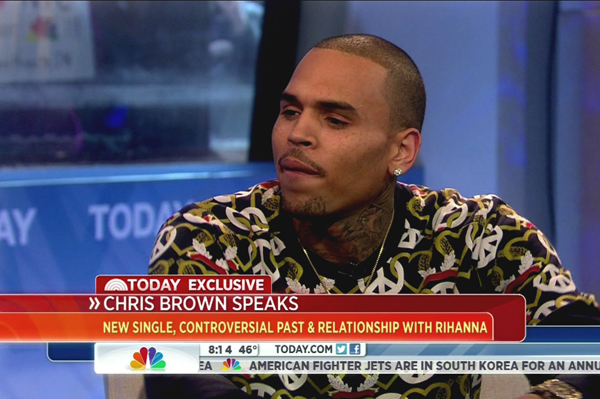 The Jumbotron watchers have spoken.

Madison Square Garden became a court of public opinion Sunday night, when an image of singer Chris Brown flashed on the giant screen and was greeted by boos. Guess the crowd hasn’t forgiven and forgotten.

Brown was sitting next to director Spike Lee, conspicuous in an orange hat, orange tie, and blue-and-orange shoes. After the boo-ing, Brown just smiled and laughed. Good call, Chris.

It’s not the first time Brown’s gotten himself noticed at a Knicks game: The singer and Rihanna went public with their rekindled relationship in December 2012, three years after Brown’s infamous assault on Rihanna. Did hoops fans boo them that night? Nobody’s telling.

Knicks fans have a bit of a rep of showing their emotions. In 2011, Kim Kardashian ex Kris Humphries was booed and heckled while on the court playing with the Nets as they took on the Knicks. According to People, the crowd chanted “We want Humphries! We want Humphries!”

Mary-Kate Olsen and boyfriend Oliver Sarkozy also used the occasion of a Knicks game to let the world know about their relationship in a kind of creepy way.

Meanwhile, Brown appeared on the Today Show this morning with Matt Lauer, and told the host “what I did was totally wrong.” According to Entertainment Weekly, Brown also said he wanted his music to “inspire the world,” especially “people that have been in my situation.”

When Lauer pointed out that not everyone will buy his apology (particularly considering that the appearance promotes Brown’s new single), Brown said, “I can’t make everybody like me. I’m not going to focus my life on trying to please those people. Only thing I can do is just please my family, myself, and please her.”