Eva Mendes and Ryan Gosling were out and about in New York City over the weekend promoting their new film, but one photographer’s words almost caused a big blowup by the actor. 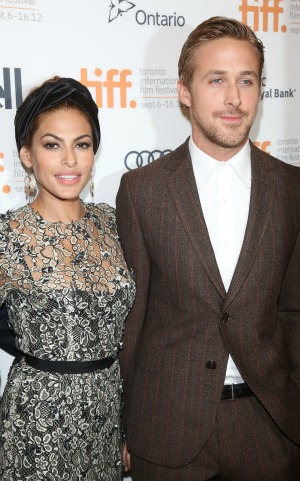 A New York photographer learned an important lesson Friday when he called Eva Mendes what could be considered a derogatory term, in front of her boyfriend.

The Place Beyond the Pines movie review: Generation “why” >>

According to the New York Post, Mendes and Ryan Gosling were at the Bowery Hotel promoting their new film, when a fashion photographer shouted at the actress, “Hey, baby!“

That was enough for Gosling to react and defend his girlfriend.

“Ryan completely flipped out, and it got heated,” an eyewitness told the newspaper. “Ryan got in the guy’s face and said, ‘Who are you calling baby?’ Eva had to jump in and calm everyone down before it came to fisticuffs. Ryan then made nice and shook the guy’s hand.”

The couple stars in a film together, The Place Beyond the Pines, and have been dating since September. However, they have worked hard to keep that relationship private. According to the Post, Mendes and Gosling showed up to a party for the film, but arrived separately. Gosling brought his mother as his date and the couple stayed apart the entire night.

“I didn’t see Eva and Ryan interact once,” a source told the newspaper. “They stayed at opposite ends of the room from one another.”

The Place Beyond the Pines also stars Bradley Cooper. It is the story of two fathers working, in two different worlds, to make the best life for their families.

“The film initially centers on a bank robber named (Gosling) and the crime he commits to support his child,” said the Los Angeles Times. “The incident renders him a target for an idealistic cop (Cooper). The men’s interaction has consequences for their families for years to come.”

The film opened over Easter weekend in just four theaters, but earned an estimated $207,000. For Writer and director Derek Cianfrance, it was a labor of love. He worked on the script for the film for five years, and made sure the actors were right for their parts.

“He took his actors through a lot of method exercises, requiring Cooper to live with his on-screen wife Rose Byrne in a house for a week as a married couple while Gosling spent six hours a day for two months working with a stuntman to perfect his motorcycle riding skills,” the Los Angeles Times reported.

Ryan Gosling is taking a break from acting >>

The Place Beyond the Pines will open in 12 markets on April 5, and will expand to 250 theaters the weekend of April 12.