Meryl Streep’s daughter, Mamie Gummer, and her husband, Benjamin Walker, have called it quits on their short-lived marriage. Their reps says the split “is amicable.” 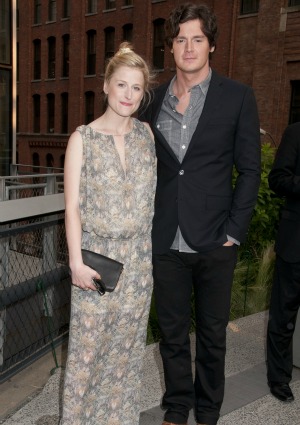 Mamie Gummer and her husband Benjamin Walker have called it quits on their marriage. US Weekly was the first to report the news over the weekend.

Gummer, an actress like her mom, hasn’t had that great a year with the cancellation of her CW show, Emily Owens,M.D., and now the seeming end of her marriage. Walker is best known for his role in the film Abraham Lincoln: Vampire Hunter.

The couple met back in 2008 when they were starring in the Broadway show Les Liaisons Dangereuses. They married in July 2011 at her parents’ home in Connecticut. The wedding was attended by celebrity friends like Laura Linney, Claire Danes, and Tracey Ullman.

At the time of the engagement back in October 2009, Gummer told US Weekly, “My mom loves him!”

No reason was given for the split, but the actress’ rep told the magazine, “It’s very amicable,” while a source told them that the separation “is very new.”

The split must be very recent since a New York magazine piece had the 30-year-old Walker mentioning his wife in loving terms. The couple resided in Brooklyn together, and he even sent her a text during the interview saying, “She always worries about me in [press interviews] and rightfully so.”

Walker is currently starring in the revival of Cat on a Hot Tin Roof with Tony winner Scarlett Johansson. Gummer was recently in the film Side Effects, and she is shooting a CBS pilot called Backstrom with Rainn Wilson.