Our boys and girls bust their butts overseas to keep us safe and sound. They deserve all the thanks we can give them and then some. Even our celebs agree! Check out these awesome celebrities showing their gratitude to our soldiers. 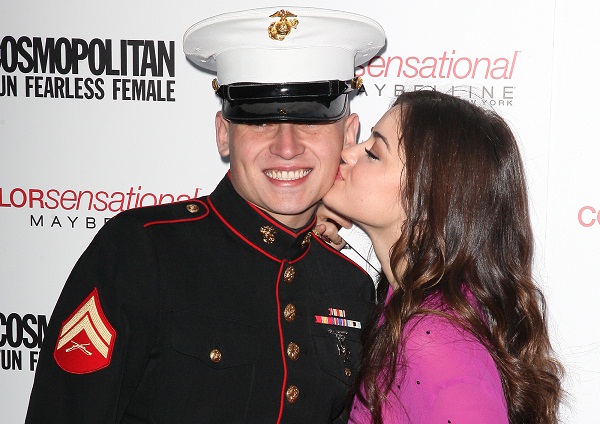 Pretty Little Liars‘ Lucy Hale kisses a Marine
during the 3rd Annual “Kisses for the Troops” event on Veteran’s Day.

Katy performed more than once on this Divas production. However, this one is the best. Not only is her outfit the most patriotic, but she also lets a few Marines help dismantle her parachute. Lucky boys! We’re sure they spent a lot of time in the sandbox dreaming of that California girl… and all the others!

Katy Perry gets cozy with soldiers >>

Long before they caused a stir when Natalie exercised the freedom of speech our soldiers fight for, the Dixie Chicks released “Travelin’ Soldier”. It’s a heartbreaker about a Vietnam-era love affair with a soldier, but everything about the tune could easily ring true today. There are still lots of sad, pretty little girls with bows in their hair.

Movies about veterans are always a good movie night choice >>

Instead of hanging out in San Diego with the rest of the divas, Paramore’s Hayley Williams and the boys headed to Kuwait to perform at Camp Arifjan. While they first performed their newest single, “Only Exception”, they went on to cover the Foo Fighers’ “My Hero”. Could there be a more perfect song to sing for our soldiers?

Tim McGraw — “If You’re Reading This”

Don’t even hit “play” until you grab the tissues. Of all the songs dedicated to soldiers in recent years, this one is the most heartbreaking. It’ll make you ugly cry, for sure. The gist: It’s a letter from a soldier, who isn’t coming home. Best/worst part: His hopes for the little girl he’ll never meet, “I hope she looks like you, I hope she fights like me.” We’re done.

Television worthy of our veterans >>

Lee Brice — “I Drive Your Truck”

New to the country scene, Brice knows exactly where to hit us to make us love him: our soldiers. We love, love, love this song because it’s one of the very few songs written from a different point of view than a love story. It’s a brother’s love and grief, which is just as beautiful and no less hard to deal with. The song is full of emotion and yet completely manly. Well played, Lee.

Do you have a favorite moment of celebs saluting soldiers? Tell us!