Justin Bieber continues his troubled European tour with some monkey business. His capuchin monkey was confiscated at the Munich airport after the singer failed to present the proper paperwork. 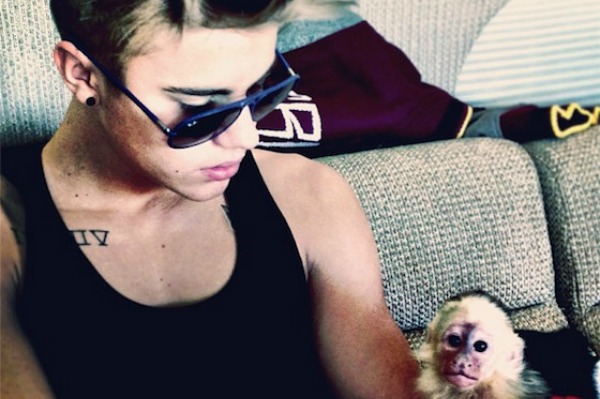 Justin Bieber has been getting into a lot of monkey business as of late with a rocky European tour and spats with his neighbor. However, this time the trouble involves a real monkey and the country of Germany.

The pop singer arrived in Munich aboard a private plane with his capuchin monkey, a gift from record producer Mally Mall. Unfortunately, Bieber didn’t have the proper paperwork to bring the animal into the country. That’s when customs officials stepped in.

Thomas Meister, spokesperson for the customs office at the Franz Josef Strauss Airport in Munich, told People, “Justin Bieber brought his monkey to Germany, but had no official paperwork with him. We were forced to confiscate the animal.”

Bieber was detained and his monkey was quarantined because he did not have permission to bring his pet into the country. The music superstar will be fined, and he will have to cover the costs of the quarantine.

As of Saturday, it appears the owner has been reunited with his cuddly friend. On Instagram, there were several photos of the two hanging together, including one captioned, “Kickin it with og.”

Are Justin Bieber and Selena Gomez back together? >>

Bieber is performing in Austria on Saturday night, but it’s unclear what he’s going to do with his precious pet the next week. He has a series of dates back in Germany beginning on April 2 with “Call Me, Maybe” singer Carly Rae Jepsen.