It’s prom season, and while old Elena would have been fretting about which Salvatore brother to take, new Elena says she doesn’t need a babysitter. 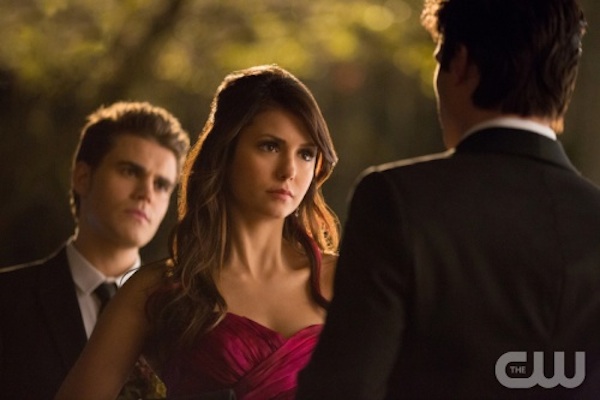 It’s prom on the next episode of The Vampire Diaries, and emotionless Elena (Nina Dobrev) doesn’t want either of the Salvatore brothers on her arm.

But she gets them anyway, of course. Stefan (Paul Wesley) and Damon (Ian Somerhalder) show up to keep an eye on her — with a plan up their sleeves. No idea how Damon managed to get into a high school prom when he’s supposed to be Stefan’s older brother. I guess at this point, so many people in Mystic Falls know he’s a vampire that they just let it slide — either that or they see him hanging around Elena so much that no one is surprised.

Missed the last episode of The Vampire Diaries? Catch up with the recap >>

Either way, Stefan and Damon show up at prom with a plan to make Elena want the cure.

No word yet on what the point is of making her want the cure when Elijah is the one who gets to decide who takes it. Could Elijah’s sympathy for Elena’s lost compassion be enough to propel him to hand over the cure? We doubt it. It’s also highly unlikely that Silas will just disappear from the picture in the near future, which means that if Elijah gives Klaus (Joseph Morgan) the cure — as duty demands — Klaus won’t be handing it over to Stefan and Damon, either.

Elena tells Damon she feels nothing for him. Then she dances with Stefan, and the two share an intimate moment. Something tells me it’s politically motivated, though. The love triangle has been kind of flat now that Elena doesn’t have emotions to spur any mutual feelings, and it looks like she won’t be sticking around prom very long. Bonnie worriedly tells Damon that Elena is gone.

The next episode of The Vampire Diaries airs April 18 on The CW.