Legendary actor Malcolm McDowell chatted with SheKnows about guest starring on the “smart” sitcom Community, surviving decades in Hollywood and how much he loves a good cup of coffee. 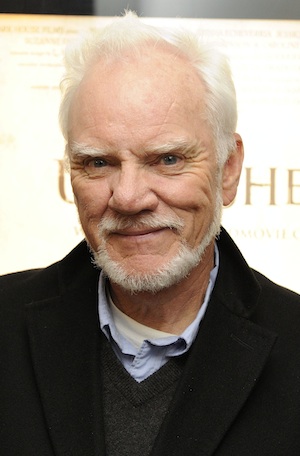 “I’m in the middle of making a cup of coffee,” Malcolm said to begin our conversation.

His voice, still thick with an English accent after many years of living in the States, is immediately recognizable. You’ve heard him and his menacing laugh in iconic films like A Clockwork Orange and Star Trek: Generations, the critically acclaimed Gangster No. 1 and the TV law dramedy Franklin & Bash.

“Just cream,” he continued, quite seriously. “I don’t drink a lot of coffee, but I do love one good one.”

As passionate as he is about a great cup of joe, he’s even more passionate about his guest appearances on the TV series Community.

“It is a very loving family they have there,” Malcolm said about the cast and crew of the struggling NBC sitcom. “And they embrace their guest stars. You’re brought into the womb of the family. I can’t remember ever feeling that way before.”

This season, Malcolm has already appeared on one episode — “Alternative History of the German Invasion” — as the grumpy Professor Cornwallis. Last time we saw him, he was so fed up with the study group that he was ready to get out of his contract at Greendale. Apparently, that didn’t work out because in the April 18 episode, he’s back and ready to flunk the group for their joint paper.

“All I can say is, there is a kidnapping.” Malcolm teased. “It’s very castrophobic. Ken (Ken Jeong, who plays Chang) is fabulous. I have no idea what he was talking about because it was from past episodes, but all of them are fabulous.”

They may all be quite wonderful, but Malcolm seems to have a special affinity for funny guy Joel McHale.

“He’s a lovely guy,” Malcolm said. “The Soup is genius. It was a great segue into Community for him. I’m trying to get Joel to do Franklin & Bash. I might blackmail him.”

Malcolm had so many great things to say about Community and its stars, but it didn’t end there. He gave props to the fans too.

“Community has a great fan base,” Malcolm said. “I like to call them ‘the deserving, smarter sect.’ It’s a very smart show, and you have to get into it and get to know the characters. The writing is special, and the fans know it. There is no other TV show like this. It’s a breath of fresh air.”

It sounds like love was oozing from every angle on the set. Even this writer fell more in love with the show hearing Malcolm talk about it! But is the love affair over, or will Professor Cornwallis return soon?

“I really loved it. It was amazing,” said Malcolm. “It was a fun time and all too fast. It’s entirely possible I’d come back. If they wanted it, I would do it. We just have to get more people to watch so NBC doesn’t cancel it.”

Community fans, being the pop-culture junkies we are, would love to see Malcolm (and the show, for that matter) return next season. Until then, there seem to be countless places we can see more of Mr. McDowell.

“I’m doing Franklin & Bash in May. Then it’s off to Russia, then Bulgaria. There’s something big I’ve been offered with an A-list director, but I can’t go into it any more than that,” he said in that classic mischievous tone he’s famous for, knowing he’s hooked his audience and they’re waiting for more.

With more than 50 years of acting experience under his belt and busier than ever, it’s clear Malcolm’s enthusiasm for his work reaches far beyond Community.

“I love what I do. I love it. ‘Are you seriously going to pay me to do this?’ I’ve felt that way my whole career,” he laughed.

But then he quickly took on a sober tone as he gave his advice to aspiring actors and filmmakers: “Believe in yourself. If you believe in yourself, others will believe in you, but it has to be an unshakable faith. And obviously, you have to have a bit of talent, but mostly belief. And that’s all there is to say.”

And with that gem of wisdom, our conversation was over — but you can hear more from Malcolm on April 18 on Community.