Matt Lauer continues to feel the heat from critics as a former intern tweets that The TODAY Show anchor was “not so nice” during his time at the morning show. 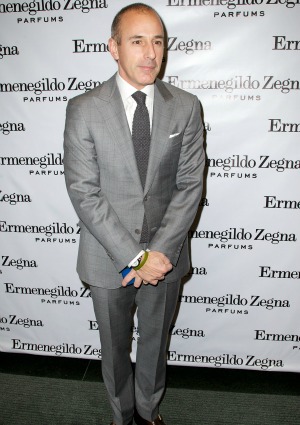 It’s tough to be Matt Lauer these days. The TODAY Show anchor is suffering from the fallout of Ann Curry’s dismissal last year in addition to falling ratings and rumors of his replacement.

Well, it just took a turn for the worse when a former TODAY Show intern going back to 1997 was quoted by a coworker on Twitter about the anchor’s demeanor on set.

Darren Sweeney, a Fox executive producer in Cleveland, Ohio, quoted Mark Zinni, the former intern, about his time at 30 Rockefeller Plaza. The duo had an earlier discussion about the anchorman’s time at the famed morning show.

Sweeney quoted Zinni as saying, “I was just a young kid with a bright future ahead of me,” and he added that Lauer was “not so nice.” Lauer’s Twitter handle was included in the initial tweet.

Zinni retweeted his friend’s post and it created a bit of a frenzy when his journalist pals joined in the online discussion.

The Cleveland-based anchor clarified the story to a follower later in the day, saying, “I was an intern there in ’97, his first year on the job… how do I say this…? He was… not nice.”

1997 was the first year Lauer was promoted to the host position, replacing longtime newsman Bryant Gumble. Prior to that, Lauer had been a newsreader on the morning show.

Well, guess who caught wind of the Twitter discussion? Yes, Lauer joined the fray and wrote back to Zinni on Thursday with, “huh? Always tried to be nice Mark. Sorry you didn’t think so. Hope you’re doing well. Matt.”

The NBC newsman is clearly feeling the heat since he rarely uses his social media profile.

Is Matt Lauer headed to Jeopardy to replace Alex Trebek? >>

Zinni took the whole story a step further by writing a post on the Ohio station’s website because the story started spinning out of control as it was picked up by several media outlets.

He wrote, “If you know me, you probably know that I don’t take myself too seriously. So, my answer was more of a joke about being young and naive during my time at Today, but I added that he wasn’t nice to me. I didn’t slam the guy, I just made an honest comment.”

Zinni was surprised the nationally-known anchorman even remembered him. He said, “I’m flattered.”

Somehow, we doubt Lauer is flattered by all of this unwanted attention, but it pays to be nice to the interns. You never know where they’ll wind up later in their career.