We wonder if she got it animal style? 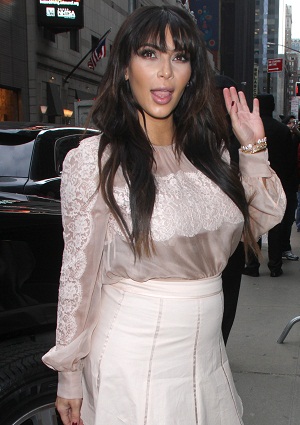 Congratulations, baby bump watchers: Kim Kardashian has “leaked” one fun, juicy piece of pregnancy information for you. Our girl Kim is officially “suffering” from her first pregnancy craving!

“Damn!!! I spoke too soon! My 1st pregnancy craving! #InNOut #EnjoyingEveryBite,” Kim tweeted. She also Instagrammed a picture of one of In-N-Out’s yummy burgers with a side of gooey cheese fries.

Is it possible for journalists to have sympathy cravings?

Since her boyfriend, Kanye West, shared the news of her pregnancy while at a concert, fans and papz have been on constant patrol of the reality star. When she recently fell ill, miscarriage fears and rumors flew like crazy and fans were itching to know if Kim and the baby (sometimes lovingly called “Baby Kimye”) were healthy.

Even with the crazy burger cravings, Kim recently blogged that she’s bound and determined to eat a healthy diet.

“I’ve been researching recipes and healthy eating tricks to make sure that I get the right nutrition now that I’m eating for two!” she wrote. “For me it’s about maintaining a well-balanced eating and fitness plan.”

As for all those weight gain rumors: Of course she’s gained a little bit weight… she’s pregnant. We think she looks fab, though. And there’s absolutely nothing wrong with diving into one of those yummy burgers from In-N-Out! Hopefully she keeps in mind her doctor’s orders to take it easy. Just because she eats it, doesn’t mean she has to run it off. The mama-to-be should definitely relax and just enjoy being pregnant.

Kim’s due in July! We’re hoping the next big announcement is the gender of that sure-to-be-gorgeous baby.