The Host’s Diane Kruger talks about her experience working with so many young actors, and spills what really happened when the cameras weren’t rolling. 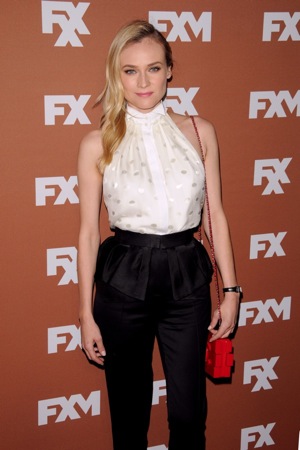 In The Host, Diane Kruger suits up to play The Seeker, who is the alien hunting Saoirse Ronan’s character, Melanie. A questionable villain, her character admittedly finds herself torn between two worlds. Although she may be intimidating behind those crazy contact lenses, she is no alien.

Kruger is a human of natural beauty who knows how to play with the boys. Whether she’s attempting driving a chrome car’s stick in the desert, or having a few drinks with fellow cast member William Hurt,  she shows that she is right down the middle when it comes to letting loose.

As The Seeker, she drove a shiny chrome car despite her not so savvy driving skills: “I got to drive it yeah. I went about 80, which it’s a stick driving car, and I’m not very good driving stick, but they are very cool… totally impractical having a shiny chrome car in the desert.”

A voice of reason, she seemed to find it also very alien to be starring amidst young and old actors, “It was kind of a unique experience for me because I’ve never been with much much younger actors, or a lot older, so I was kind of in the middle… It was kind of interesting for me… It was William Hurt and myself in a hotel bar having a blast.” Kruger is clearly able to let down her hair, both onscreen and offscreen.

Having worked on a variety of films, I asked her what she thought people would think of this movie.

“I think people who love Stephenie Meyer will definitely enjoy this.”

As to whether or not she believes in other life forms, she answered honestly and pragmatically claiming, “I definitely think there’s another form of life somewhere. I think we would be very arrogant to think that we would be the only ones in this vast universe.”