The X Factor has nailed down another judge. Despite two of them flying the coop, Demi Lovato is here to stay. It’s been announced that she’ll be back for another season of the singing competition. 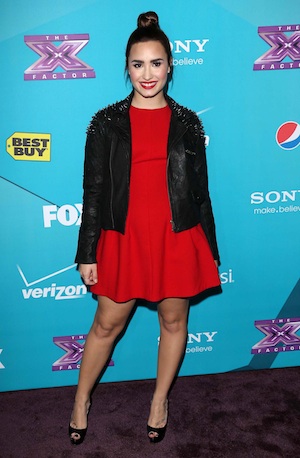 Demi Lovato is sticking with The X Factor. The singer and actress has confirmed that she’ll be back for Season 3. Unlike former judges Britney Spears and L.A. Reid, Lovato is returning to the judges table.

She released an official statement (via Zap2it), formally announcing her decision.

“I am so excited to return as a judge and mentor on The X Factor. Last season was an unbelievable experience and I really enjoyed developing personal relationships with the contestants and the panel. I look forward to taking my previous experience and applying it to make this season even better!”

Britney Spears is done with The X Factor >>

Talk about a change of heart. Last month, it sounded as if Lovato was unsure about the show. In Cosmo on Campus she revealed, “I don’t think I was ready when I started on The X Factor. In an ideal situation, I would have maybe waited a year or more [after coming out of treatment].”

She also stated that she had “no idea” whether or not she’d be back for Season 3. Fast forward to today, and we have a definite answer. It’s one that co-judge and producer Simon Cowell is thrilled to hear.

“I couldn’t be happier that Demi wants to come back this year,” he said in a press release. “She’s a superstar in her own right and was a fantastic mentor last year. Even though she can be really, really annoying — I truly enjoyed working with her and so did the artists. I’m especially pleased she’s back, even during her world tour!”

Open auditions for the new season of The X Factor begin next month.