Jennifer Lawrence still doesn’t feel comfortable with her celebrity and said there is a reason she never reads anything she says. 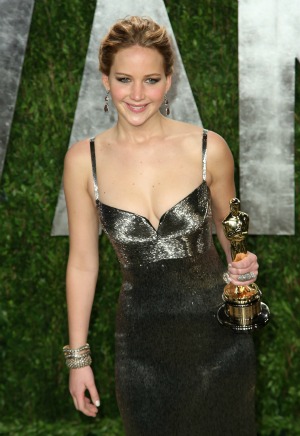 Jennifer Lawrence emerged on the A-List scene very quickly and it doesn’t look like she has quite gotten used to it yet. While the actress offers a refreshing change from those who have been in Hollywood for a long time, she still finds red carpets pretty scary.

“I’m afraid I’m going to go my whole life being scared like a Chihuahua,” she told the U.K.’s Fabulous magazine. “It’s not my comfort zone. Making movies is where I belong. I shouldn’t be heard just talking. So, when I’m doing movies, I’m really happy. That’s where I’m comfortable, that’s my home. When you put me on a red carpet or on a stage, I turn into Chihuahua Jennifer.”

Lawrence enjoys her job so much because she said the only time she really feels comfortable is when she is playing someone else. But when she does have to be herself, she is apparently quite the talker.

“I have no control over what comes out of my mouth,” she said, according to Us Weekly. “I would probably turn into a mute if I read what I said.”

What do the stars’ Oscars styles reveal about their personalities? >>

Even though Lawrence is now considered one of the best, and most sought after, actresses in Hollywood, one of her top priorities is to stay who she is.

“Definitely my family is not the kind of family that would ever let me turn into an a–hole or anything like that, so I am fortunate to have them,” she told the magazine.

It looks like so far, so good. The 22-year-old doesn’t feel like she has yet been changed by the success.

“I don’t ever walk around feeling famous, I walk around feeling the exact same way I have walked around my entire life, but it’s not until I talk to somebody and see in their eyes that I’m different. It makes me feel weird,” she said, according to Us Weekly. “A lot of things that I didn’t even think could ever be possible for me have happened, all in a year. It’s been overwhelming, but in a wonderful way.”

Lawrence won the Best Actress Oscar for Silver Linings Playbook in February and will next be seen in The Hunger Games: Catching Fire and X-Men: Days of Futures Past.