Is Barbara Walters really ready to retire? After years of speculation, she may finally follow through. The TV legend is pegged to say to adieu The View next spring. 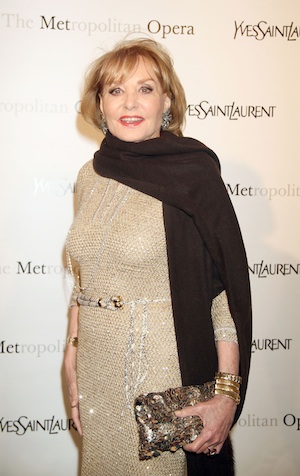 Barbara Walters‘ career is nothing to sneeze at. The journalist and media personality has been a staple in the industry for over 50 years. Thursday, it was announced that she’s throwing in the towel.

According to The Hollywood Reporter, sources claim that Walters plans to retire in May 2014. The 83-year-old will soon make a formal statement regarding her future.

Apparently, she’ll stick around for another season of The View to aid with the transition following Joy Behar and Elisabeth Hasselbeck’s exits. Yes, there are still rumors that Hasselbeck is leaving the show.

Walters’ final year on The View will be filled with tributes celebrating her impressive career. Some of her milestones include becoming the first woman to co-host a TV news program with NBC’s Today (in 1974).

Two years later, Walters also became the first woman to co-anchor the ABC Evening News, not to mention her work on 20/20, her Oscar specials and her annual Most Fascinating People list.

This isn’t the first time Walters has leaned towards retirement. Back in 2011, during an interview with President Barack Obama, she revealed that she planned to retire “next year”.

As we all know, Walters stuck it out but could this be the real deal? She recently returned to work following a battle with chicken pox and issues with her health have come into question.

Do you think Walters should retire?