The Host is landing in theaters today and so is rising star Saoirse Ronan. 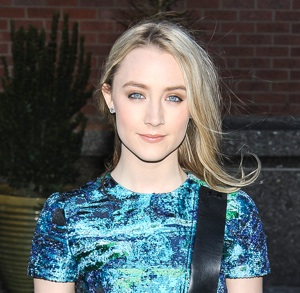 A true shining star, light years from her age, Saoirse, pronounced sir-sha, has the maturity of an actress beyond her years. Her ability to play two different characters talking to herself, handling all those smooch fests and conveying the pure emotions of a dangerous world show that she is capable of carrying the weight of a Stephenie Meyer film. A light-hearted Irish girl, she glows with a magnetic youthful energy. She also really likes talking with her hands!

Talking with your hands is one thing, but what about talking to yourself as two different people? In the movie, Saoirse plays two different characters, Melanie and Wanda, who both carry on a dialogue with each other throughout the entire film. So how did she have a conversation with herself? According to Saoirse, it was difficult, but fun.

Although it might seem easier said that done, she claims, “I talk to myself anyway so I’m kind of used to that.”

As for the pressure of starring in a Stephenie Meyer movie, Saoirse says, “I was shocked really because I never thought anything like that would happen.”

As far as having to work closely with the famous writer on set, she says Stephenie was very approachable: “She would never impose herself… just as a friend I talked to her if I was worried about something.”

Catch The Host in theaters now and see what all the talk is about!