With their first new album since 2007’s Era Vulgaris, rock band Queens of the Stone Age are back and bigger than ever in 2013. 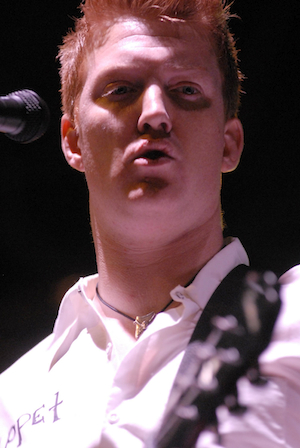 Titled … Like Clockwork, Queens of the Stone Age’s new album, due out in June, has a long list of guest stars, including Elton John, Trent Reznor of Nine Inch Nails, Dave Grohl and Arctic Monkeys frontman Alex Turner.

On the band’s website, QOTSA.com, fans get small snippets of what seem to be new tracks from the upcoming album. Each time the refresh button is clicked, another mysterious and disjointed 5-second fragment plays.

One clip is reminiscent of the driving rock of classic Queens of the Stone Age while another sounds like you are trapped in a metal shipping container on Halloween. Frontman Josh Homme has fittingly described this album as, “an audio documentary of a manic year.”

Them Crooked Vultures along with Homme’s frequent collaborations as part of his series of recordings titled The Desert Sessions will no doubt have had an effect on the driving rock sound of past Queens of the Stone Age tracks.

Over the years, guitarists, bassists, and drummers have come and gone, but Homme retains his throne at the center of the band. It seems as if Homme is never more at home than when he is collaborating with other artists. We will have to wait until June to see how these collaborations have influenced the tracks on …Like Clockwork.

Did a past soap star join the Foo Fighters? See for yourself! >>

While Queens of the Stone Age has quite a few festival dates lined up already, they will embark on an extensive headlining world tour later this year to support the album.

Concertgoers at this year’s Lollapalooza Brazil were some of the lucky few to hear a new track by the band. Thanks to the magic of the internet, we’re bringing you this new track too. Check out “My God Is The Sun”. Oh, and as a warning, this is a rock concert so when the song is over there is some, ahem, salty language in praise of the croud from Mr. Homme. Rock on!