Rob Kardashian faces an embarrassing accusation that he stole a photographer’s memory card to avoid shirtless pictures of him making their way to the public. Police are investigating after a report was filed. 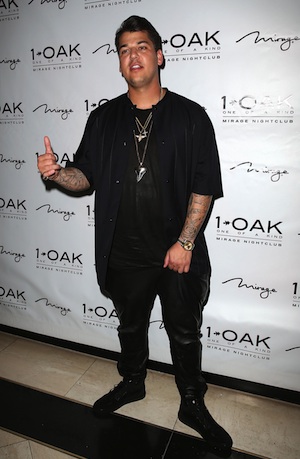 Police are investigating Rob Kardashian for allegedly stealing a memory card out of a paparazzo’s camera.

The photographer claims Kardashian discovered she took pictures of him without his shirt on and he flipped — grabbing the camera and snatching the memory card.

Rob Kardashian: I gained 40 pounds from my breakup >>

While Rob did tell the paparazzo he’d pay for the memory card, Kardashian is still accused of robbery and a police report was filed against Rob on Wednesday. Speculation for Rob’s drastic measures to avoid shirtless photos of him making their way to the public revolve around Rob Kardashian’s self-consciousness about his recent weight gain.

Rob Kardashian is currently taking steps to lose weight and can be seen frequently hitting the gym. Rob gained weight after his difficult breakup with singer Rita Ora. He explained on Kourtney & Kim Take Miami, “All I did was waste a lot of money and gain 40 pounds. I need to focus on me. That’s all I wanna be about.”

The youngest Kardashian — of mom Kris Jenner and late father Robert Kardashian — said his breakup with Rita Ora was challenging. While many thought Rob was in love with Ora, she told Glamour UK she has yet to fall in love. “In 22 years, there’s been nothing. I have had young fascinations, but never love.” Ouch.

Rob Kardashian has not released a statement about yesterday’s robbery accusation.