One of the biggest festivals in the country may have just had their biggest secret leaked online. If it’s true, this year’s Lollapalooza will be worth a trip to Chicago.

Related story Bonnaroo's lineup announcement is the most unique yet — see who's playing! 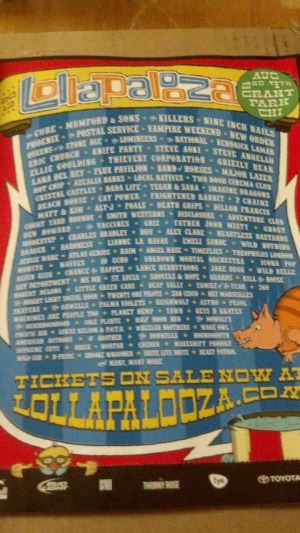 Lollapalooza was started 22 years ago (with a long break from 1997 to 2003) as one of the biggest music festivals in the country, and recently announced some of their headliners for the 2013 concert.

New: Mumford and Sons “Whispers in the Dark” video >>

The festival had previously announced bands Mumford & Sons, Phoenix, The Killers, The National and the Postal Service would be playing the 2013 festival, but a photo was leaked online Thursday that may give away the entire lineup. Tickets are on sale now for Lollapalooza, something the festival does before they announce all the bands. But they had planned to release that full lineup on April 9.

A photo has been circulating online that looks like a poster for the festival, and includes all the bands. The Chicago Tribune said “multiple industry sources” have confirmed with them that the poster is real. So just who does the poster say is coming?

The Cure, Nine Inch Nails, Queens of the Stone Age, the Lumineers, Kendrick Lamar, Eric Church, Steve Aoki, Ellie Goulding, Thievery Corporation, Grizzly Bear, Lana Del Rey, Band of Horses, Tegan & Sara, Imagine Dragons, 2 Chainz, Matt & Kim, and over 100 other bands are included in the festival, according to the poster, making it one of the biggest, and most diverse, concerts of the year.

Lollapalooza held its first festival in 1991, and was started by Jane’s Addiction’s Perry Farrell. According to the festival, the idea for the show had originally started as a farewell show for the band, but has grown from there.

“Lolla was in the delivery room when alternative rock was born, brought hip-hop to the masses, waved glow sticks when the electronica scene came of age, and staked out tiny clubs to bring the best indie-rock to the big stage,” said Lollapalooza’s website.

The festival was important in the world of music before the Internet was a place for up-and-coming artists to get their music to the masses. And they made a point of including all genres of music each year.

“Farrell’s festival did it with flair, pulling together diverse acts like Nine Inch Nails and Ice-T for a culture-spanning celebration the world had never seen,” the festival explained.

Three-day passes for the 2013 festival are sold out, but one-day passes will be released the same day as the official Lollapalooza announcement, April 9.