Let’s be frank — some celebrities choose weird-a** names for their kids. While we’re not sure why they do this, we think we’ve figured out how they do it. If you want to be one of the cool kids and give your baby a truly unique name, we can help… 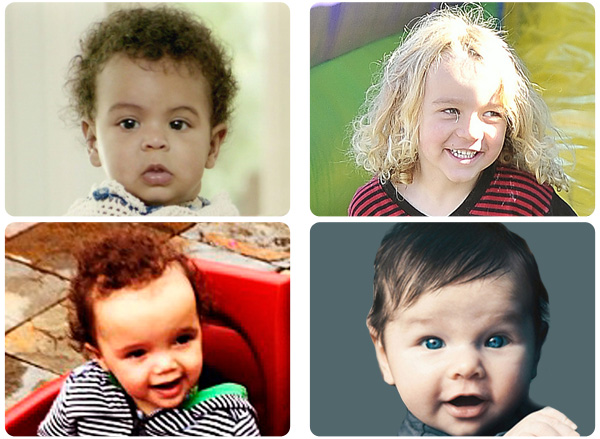 Are you the cosmic type, for whom only a celestial baby name will do? Well, if it was good enough for celebrity chef Jamie Oliver, who named his babies Rainbow Aurora and Petal Blossom Rainbow, it’s good enough for you. How about something like Northern Lights or Halley(‘s) Comet? How about Kissmy Aster?

Nothing celebrates new life like naming a baby after someone who has died. Mariah Carey and husband Nick Cannon named their baby girl twin Monroe after Marilyn Monroe. Kristen Bell named her newborn girl Lincoln. Why not a boy named Mother Teresa? Or a girl named George Washington? We guarantee they will be the only children in kindergarten with those names!

What child wouldn’t want to be associated with something that is eaten, digested, and later eliminated from a lower intestine? We all know Gwyneth Paltrow named her daughter Apple and Jamie Oliver once again struck baby name gold when he named his bundle of joy Poppie Honey Rosie. Awww. General Hospital and DWTS daddy Ingo Rademacher named his little peanut, um, Peanut. That’s just nuts! If you’re determined to do this, at least name your baby after exotic food like Spicy Thai Lobster Soup or Grilled Shrimp in Banana Leaf Pouch.

When desperate folks play Scrabble, they make words up and try to get away with it. Celebrities sometimes apply the same concept when naming their infants. Nick Lachey and Vanessa Minnillo named their little guy Camden, presumably by taking the first three letters of Cameron and the last three letters of Caden. This comes in handy when you want to name your new baby after, say, two grandmas. Perhaps your grandmas’ names are Mabel and Elizabeth. You can name junior Mabeth. How pretty.

Some parents, like Beyoncé and Jay Z, can’t choose a specific baby-naming category, so they made up their own when they named their daughter Blue Ivy. That’s lovely, and original because Green Ivy would have been too obvious. If this is a name game you’d like to play, simply sit down with your significant other and each of you write down your three favorite colors and your three favorite plants on slips of paper. Fold the paper carefully and toss into a hat. Each of you pull out a piece of paper! Yes, you may end up naming your baby Green Yellow or Fern Spider Plant, but you may end up with something really groundbreaking like Orange Aloe Vera or Purple Marijuana.

Geography with a side of Disney

Do you have a favorite New York City borough, region or state? How about a favorite Disney character? Why not mash up these two completely unrelated ideas to form a baby name? That’s precisely what Ashlee Simpson and Pete Wentz did when they named their newborn Bronx Mowgli. Reese Witherspoon named her baby Tennessee, and Victoria and David Beckham named their baby Brooklyn. So why not Manhattan Mulan? There is always Queens Jasmine. Staten Island Belle has a certain flair, don’t you think?

Before we dismiss the topic of geography, why not name your baby after a nationality like Mariah Carey and Nick Cannon did when they named their boy twin Moroccan? These options are limitless — picture a baby Italian, French, Irish, Scottish. Let’s just take this idea one step further and bestow a ZIP code on a baby? Won’t you be cool when your baby announcement proudly introduces “Baby 90210” to the world? Sure, the child will be mocked mercilessly on the playground, but he or she will at least have a unique name!

When all else fails…

Celebrities really make up their own rules when it comes to naming babies, and you should, too. Jason Lee named his son after an occupation — Pilot. That’s clever! How about Sanitation Engineer, or Beer Delivery Truck Guy, or Dude Who Takes Your Ticket Stub at the Movie Theater? Take a page out of Toni Braxton’s baby name book and affix a moniker like Diesel to your newborn. Fossil fuels make great baby names! There’s Unleaded, Premium, Oil, Sludge and Jet Fuel. Now we are way outside the box! In fact, the box burned up because it was next to your baby with the flammable name.

On a final note, the options are only limited to your vocabulary and familiarity with common nouns. One word of caution, however — if you’ve never heard the baby name that you are considering, bear in mind there may be a very sound reason the name does not already exist.