Celebrities like Beyoncé and Ben Affleck unite for marriage equality through social media as the Supreme Court of the United States hears landmark cases that could determine the future of gay marriage for the nation. 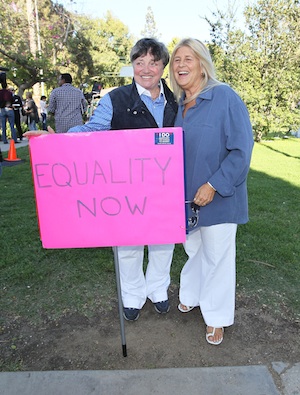 Hollywood is notorious for its liberal — and some say progressive — mentality. With the Supreme Court landmark hearings on gay marriage this week — California’s Proposition 8 on Tuesday and the Defensive of Marriage Act (DOMA) on Wednesday — celebrities are standing up for marriage equality.

Beyoncé posted to her Instagram account, “If you like it you should be able to put a ring on it #wewill unite4marriageequality! B” Madonna also took to Instagram to post a picture that stated, “Marriage Equality! Let’s start a revolution” and captioned her photo as “#marriage equality. A revolution of LOVE !!”

Ben Affleck took to his Twitter account to retweet President Barack Obama‘s message that “same-sex couples should be able to get married” and Affleck added “I agree” as he sent out the tweet to his thousands of followers. Scandal and Grey’s Anatomy creator Shonda Rhimes tweeted, “Very much hoping that SCOTUS provides my friends with the same rights and freedoms that I enjoy. #Equality.”

In addition to Madonna’s Instagram message earlier this week, she also took a stand at the 2013 GLAAD Media Awards. Said Madonna, “I don’t know about you but I can’t take this s**t any more. And that is why I want to start a revolution. Are you with me? It’s 2013 people. We live in America — land of the free and home of the brave? That’s a question, not a statement.”