Sexiest Man Alive Channing Tatum thinks another Hollywood hottie is even hotter than him. And he wouldn’t mind rolling around with him. 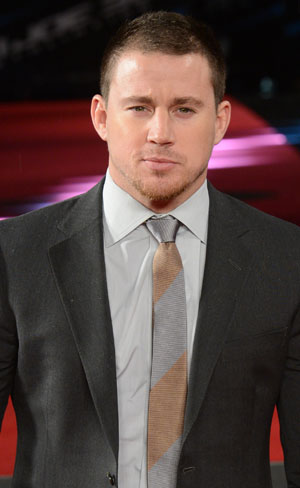 Channing and George, sitting in a tree, K-I-S-S-I-N-G. At least, that’s what would happen if Channing Tatum had his way.

Expectant papa Tatum admitted to a fervent man-crush on George Clooney at a press screening for new picture White House Down when the 21 Jump Street star was asked who he thought the real sexiest man alive is (you will recall that People named Tatum its pick for 2012.

“Well, I’ve spent time with George Clooney and he’s the most interesting man on the planet,” replied Tatum. “He can do it all. Yep, I guess what I’m saying is I’d have sex with him.”

Tongue in cheek? Who knows?

It’s true enough that the two have hung out: As UK paper The Sun reports, Clooney hosted Tatum and wife Jenna Dewan at his luxe vacation pad in Lake Como, Italy, last summer when Dewan and Clooney’s old lady Stacy Keibler became pals. The Tatum/Dewans and Clooney/Keiblers even went boating around Lake Como with Clooney’s folks.

Did Clooney pilot the boat extra-impressively or something?

Tatum is given to having bro crushes: He told Entertainment Tonight in January that co-star Jude Law made him giddy while filming Side Effects. When asked if he had a crush, Channing responded, “I completely do. I’m getting kind of sweaty thinking about it. He’s a mesmerizing dude.”

“He even stated that Jamie Foxx who he stars alongside in White House Down could be the next one to catch his eye,” writes the New York Daily News.

Plenty of Hollywood stars probably wouldn’t mind being in a sandwich like that.