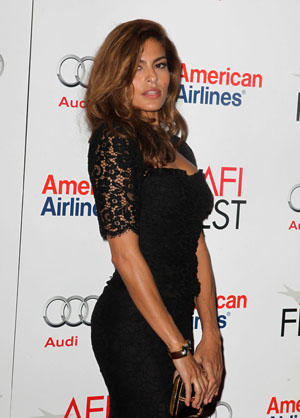 Gawker put it best: “Most of New York Magazine‘s April profile of actress Eva Mendes is devoted to her refusing to talk about things.”

One thing she was apparently OK disclosing: She doesn’t want the paps to get shots of her walking with the dogs she and Gosling own.

“She wishes that tabloids would blur the faces of their dogs, Hugo (hers) and George (his), in photos, like British papers do to kids’ faces,” New York Magazine writes.

“I’ll go somewhere and they’ll be like, ‘Hey, Hugo!’ and I’m like, ‘How do you know Hugo’s name? That’s so creepy!'” the magazine quotes her as saying.

Granted. However, Mendes talks about Hugo in interview after interview, including, as Gawker points out, multiple minutes on Hugo on the Late Show with David Letterman last week.

This is the same dog, by the way, that had a shock collar that Mendes tested by trying it on herself. No, she didn’t put it on, she just put it against her arm.

Mendes also said that she uses the shock collar to prevent Hugo from killing squirrels and other neighborhood animals, and that people really “get mad” at her for using it.

Meanwhile, Gawker helpfully points out that blurring Hugo’s face in pap pics wouldn’t really work, “because the defining feature of Eva Mendes’ dog is not his distinctive face, but the fact that he is the only dog walking next to Eva Mendes.”