Karen and Jimmy finally get it on, while Tom breaks his ex’s heart… again. 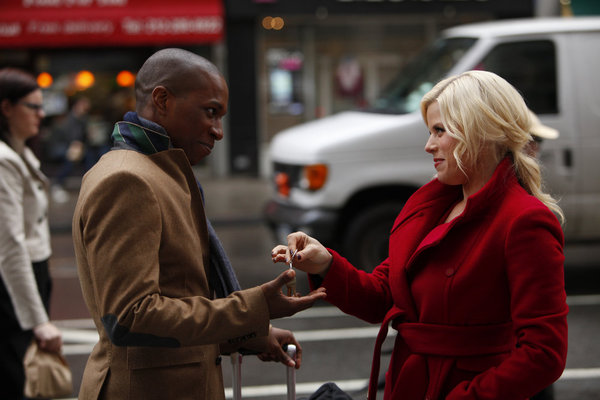 Tom isn’t exactly killing it in his new position as director of Bombshell. In fact, left to his own devices, he may run the show right into the ground and ruin the 113th chance this show has to make it. It’s bad enough that he has decided to say “yes” to his actors’ every request, but things take a major turn for the worse when his old flame strolls into town.

Sam has a week off from his role in The Book of Mormon and has decided to spend it at his old stomping ground — Bombshell rehearsals. It’s completely Tom’s style to let those old feelings rise to the surface and affect his judgment and that’s exactly what he does. He tells Sam to quit his job and gives him his own song in Bombshell. The only problem is, there isn’t any room for that song and it could hurt the show. Now he has to decide if he’s going to man up and be the director the show needs, which means breaking a few hearts along the way.

Surprisingly, Tom goes to Derek (Jack Davenport) for advice. Well, if there’s anyone who knows about breaking hearts and crushing dreams, it’s this guy. Tom starts to see that being a director is like raising children — you can’t always give them what they want. Sometimes you have to say no, even if it means people don’t like you. And that’s exactly what he does, which is unfortunate for Sam who is now heartbroken and jobless.

Across town, Hit List is having troubles of its own. The creator and the director are seriously clashing, but are they battling over the show or Karen (Katharine McPhee)? After a night on the town and a few drinks, Karen finally gets up the nerve to ask Jimmy (Jeremy Jordan) if he really likes her. He doesn’t respond fast enough and Derek is able to swoop in.

He walks her home and insinuates he wants more, but she leaves him hanging on the doorstep. A moment later Jimmy shows up, marches his way into Karen’s apartment and sweeps her off her feet. Literally, off her feet and onto the dining table. It’s good to see Karen finally being passionate about something! Hopefully she can bring that kind of energy to the show and make it a success.