James Franco has broken one of Anne Hathaway’s rules, and quite possibly their recently repaired friendship too! The actor shared some theories on “Hatha-haters” during a recent chat with Howard Stern. 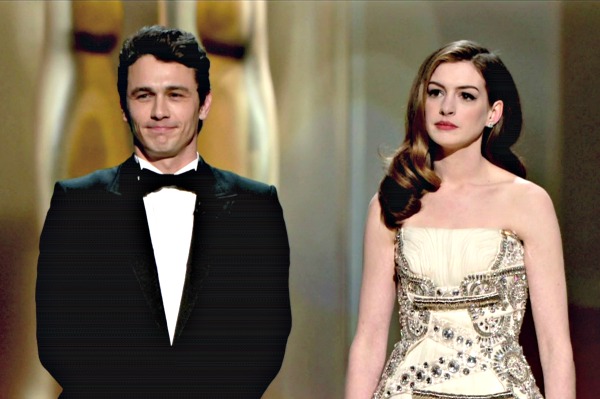 Who better than James Franco to shed light on the new hate-on-Anne-Hathaway phenomenon? Much to the Oscar winner’s frustration, her former co-host indulged in a coversation about “Hatha-haters” during a recent chat with Howard Stern.

“I’m happy to revisit this, but you’re going to have to take the lead,” the 34-year-old explained to his interviewer. “She does not want me talking about this, but okay.”

“Everyone sort of hates Anne Hathaway, and I’ve explained that I do too and I don’t know even know why sometimes,” the shock-jock offered in an effort to get the discussion rolling.

“She’s just so affected [and] actress-y that even when she wins an award she’s out of breath, and then she has the standard joke that sounds like it’s [been] written [for her]. And it all seems so scripted and acted.”

James Franco is too trashy for his neighbors >>

Before James Franco weighed in, the ever-opinionated Howard Stern added, “She comes off like the goody two-shoes actress and it’s just fun to sort of hate her. Hate is a strong word… but [I] dislike her, even though she is a great actress. Is that accurate?”

“I’m not an expert on — I guess they’re called ‘Hatha-haters’ — but I think that’s what maybe triggers it,” the actor, who memorably bombed at the 2011 Academy Awards alongside the newlywed brunette, agreed.

Did Anne Hathaway have an Oscars-sized meltdown? >>

“We haven’t talked in a while,” the Spring Breakers star shared of his current relationship with the Les Miserables actress. “Anne and I made up, by the way. Let’s just get that on the record.”

“It was a really hard time after the Oscars,” James Franco added. “She wasn’t mad at me, I don’t think… she didn’t say she was mad at me for what happened… The critics were so nasty.”

Are Howard Stern and James Franco right that it’s “fun” to hate on Anne Hathaway?