West Coast Choppers founder Jesse James got married this weekend, making it his fourth trip down the aisle. So does he have a type? We examine what — aside from questionable judgment — the women who wed the chop-shop tycoon have in common. 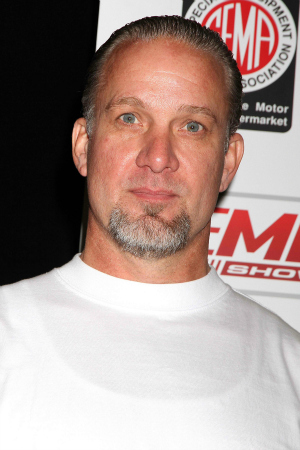 There exists little information in circulation about Jesse’s first wife, Karla James. We know they were married from 1991–2002. We know they have two children together: Chandler and Jesse Jr. Other than that, we’re reduced to the old cliché of judging a book by its cover. Karla, who is likely in her 40s, makes for one hot-bodied mama — something that appears could possibly be attributed to a “mommy makeover” (a boob job, tummy tuck and facial fillers).

Jesse didn’t waste much time finding his next Mrs Right (Now). The same year he split from Karla, he made Janine Lindemulder his wife. Superficially, Janine bears a slight resemblance to Karla — they are both leggy blondes with big racks. That, however, is pretty much where the similarities stop. While we don’t know for sure what Karla does for a living, if she shared Janine’s profession of stripper/porn star, we’re pretty sure we would have heard about it. In 2003, Janine was arrested for beating Jesse with a flowerpot (yes, a flowerpot). A year later they divorced, but they’ve been duking it out over custody of their daughter Sunny ever since. At the moment, Jesse has full custody… Janine resides in an Oregon halfway house.

When Sandra Bullock took her 10-year-old godson to tour the Monster Garage set, she never expected to meet her future husband. But that’s exactly what happened and Sandy married Jesse in 2005. The odd couple seemed truly happy — Sandy even took to caring for Jesse’s kids as though they were her own. Then scandal broke five years into their happily ever after when several women came forward claiming affairs with Jesse. When he copped to an 11-month affair with a tattooed lady by the name of Michelle “Bombshell” McGee, well, that was the stripper that broke the marriage’s back (or something like that). How does Sandy — America’s sweetheart — fit in with Jesse’s other lovers? Uhh… she doesn’t.

After the dust settled on Sandy and Jesse’s divorce, Jesse moved on to a high-profile relationship with LA Ink’s leading lady, Kat Von D. Like Jesse’s former wife Janine, Kat Von D sports some serious tattoos. But, despite being engaged to him as recently as late 2011, Kat Von D didn’t tie the knot with Jesse. Rather, they broke things off and Jesse popped the question to professional drag racer Alexis DeJoria a year later. She’s brunette like Sandy and has tattoos like Janine, yet seems a bit incongruous with his “trophy wife” style. But who knows? Maybe the fourth time will be a charm.