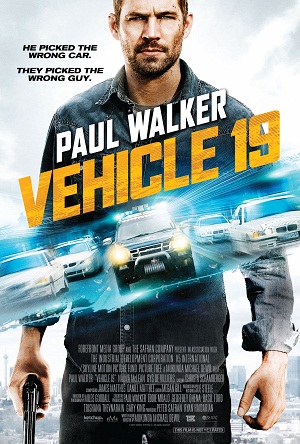 Fasten your seatbelts! Blue-eyed bad boy Paul Walker returns to theaters playing a foreign traveler who gets tangled up in police corruption in Vehicle 19. It seems that his Fast and Furious movies have steered him into the driver’s seat of this new thriller where he is in for the ride for his life.

The opening scene is the same old story we’ve heard for centuries from guys: “Angie, it’ll be different this time.” OK, Paul, but just because we love you so much! I guess part of his karma was picking the wrong rental car with a hidden body tied up and a concealed weapon inside. You’re not in Kansas anymore, Paul. There’s no use flexing your muscle car in South Africa. Paul’s character Michael Woods ends up in the wrong place at the wrong time and this time he has to drive on the right side of the car. As the song from Cops says, “Bad boys bad boys, watchya gonna do when they come for you?” Instead of playing good cops the police are the bad boys this time.

There are lots of speeding cars and stunts that will keep you on the edge of your seats and, since this is a movie, there are no driving rules or speeding tickets! The faster Michael goes, the safer he is. He’s a man with nothing to lose, except his life. I don’t think we will ever see a movie where Paul Walker is following the speed limit.

If Paul Walker continues his driving career in films, why not call up Ryan Gosling from Drive before he takes a break from acting! That would definitely start some heart palpitations. Another reason why we love Paul Walker is his philanthrophic efforts in supporting the “Love the Ocean” campaign. Must be why you can see the ocean in those blue eyes.