Katharine McPhee is done with Smash, before Smash is done with her: The New York Daily News reports that she’s distancing herself from the ratings-challenged series.

Related story Katharine McPhee Gets Candid About How Her Newborn, Rennie, Gave Her Body Confidence 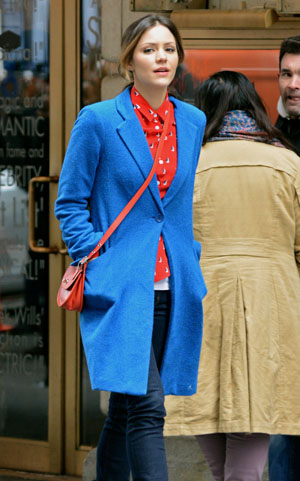 Smash is on the way down. And American Idol alumnus Katharine McPhee hopes she doesn’t disappear with it.

“She refuses to do any interviews pertaining to Smash now,” the New York Daily News quotes a source “close” to McPhee as saying. “She’ll only talk about magazines she’s in and her music. She knows it was a failure and she doesn’t want her name linked to it, because nothing she has done has been a big hit. She wanted to break through and be a big star by the time she was 30.”

McPhee just turned 29 yesterday. You still have a year, Katharine!

Smash debuted to super-hot ratings, pulling down 12 million eyeballs for its debut, the Daily News reports. The ratings kept going down all through the show’s first season, leading show runners to do a much-ballyhooed makeover behind the scenes.

When the sorta-brand-new Smash premiered in February, the writing was on the wall: 4.47 million viewers and a minuscule 1.1 share of the all-important age 18 to 49 demographic, the Daily News reported in February.

In a few weeks, that rating had fallen even further: 3.3 million viewers and a 0.9 rating in the 18-49 bracket, the Huffington Post reported.

Considering that NBC spent $30 million on a promotional campaign for the second season, according to the Daily News, it would have been just as cost effective to just send every viewer a check.

Meanwhile, the Daily News says, McPhee is ticked off that co-star Megan Hilty released an album before her. “Last week she released her album, It Happens All the Time, and headlined a sold-out Carnegie Hall,” the News helpfully points out.

Meanwhile, McPhee’s still working on her album. “She refuses to work with any producers that can actually help her, and her husband, who is also her manager, isn’t really any help,” says the Daily News source about McPhee and husband Nick Cokas. “Katharine is just difficult and isn’t making the right choices.”

McPhee’s rep says it’s “not at all true” that she’s distancing herself from Smash.

On March 15, McPhee tweeted “Heading to LA… Time to get my record done. Only has taken me 2 years.”

McPhee’s last album, Christmas Is the Time to Say I Love You, debuted in October of 2010.