The one-man band is no longer in the angry or sad place he once was, and the new album will be a sign of that.

Related story Clear Your Calendar, Because Netflix's Original Holiday Movies Are Upon Us 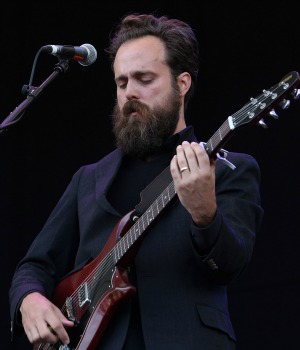 Iron and Wine, better known as indie-folk singer Sam Beam, is out with a new record in April, and this time, he is in a very different place in his life. Fans can expect a completely different album than the band’s last record, 2011’s Kiss Each Other Clean.

New: Mumford and Sons “Whispers in the Dark” video >>

“The last record was a fairly angry record,” he told Erik Hayden with the Hollywood Reporter.

But for this album, Beam said that he attempted to stay hands-off in the recording process by writing the lyrics and playing a little guitar, but otherwise letting the other musicians do what they do best.

“Honestly, I didn’t play a whole lot,” he said. “But we had people come in who could actually play. And I literally just sat in the booth and sang for most of the session. I felt like Sinatra or something; it was hilarious.”

Beam brought in a multi-instrumentalist who added new sounds to his songs. He told Hayden that Rob Burger added brass and strings, something Iron and Wine fans may not be used to.

David Bowie returns with new album, The Next Day >>

“I had never fooled with the strings section before,” Beam said. “What’s going on is complex, but it comes across as relaxed and sophisticated.”

The musician said this was almost a theme album, and it helped him understand the flow.

“The album follows the central conceit of a couple” [“Not necessarily the same couple,” Beam notes] “that appears throughout the 12 songs and serves to provide narrative cohesion,” said Hayden.

You may remember Iron and Wine from his song “Flightless Bird, American Mouth” as the “wedding song on Twilight.

Besides following the couple through the record, Beam said it will also follow them around cities of the U.S., including Milwaukee, South Carolina, New Orleans, New Mexico and even Barstow, California.

“This one is almost like a travelogue,” he told Hayden.

According to Hayden, the album continues to take Iron and Wine further away from the “sparse-sounding” 2004 album Our Endless Numbered Days and the multi-instrumental sound is proof of that. But the musician continues to write music that is who he is.

“I try to write songs that pertain to us on a human level, and tools are part of it, but not the core of us; they’re just an extension, they’re part of the scenery,” Beam said.

Iron and Wine’s new album, Ghost on Ghost, is out April 16.