With only four girls remaining, Margaux Brooke’s blogs about her journey to being crowned The Face. 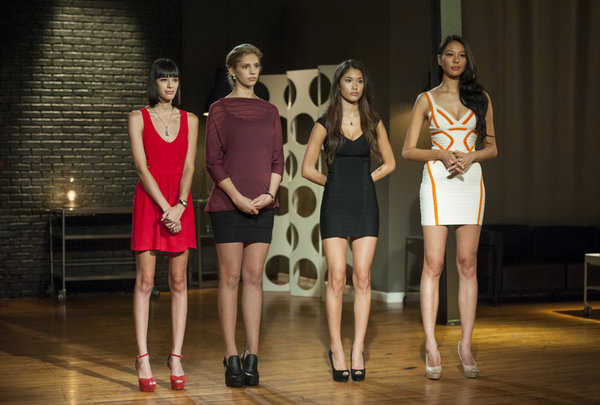 Last week started off with a rather entertaining test shoot called “What’s In My Bag.” We were each given a bag with either something personal or something random. We then had to explain to Jennifer Peros of Us Weekly what the item was and why we were carrying it.

Stephanie definitely won for most embarrassing item. She pulled a condom out of her bag and went on to answer every single question Jen threw at her, instead of opting for the “that’s personal” option. Either way, Steph handled it really well and her reactions were wildly entertaining. I could not stop laughing. Ebony also received a condom in her bag, which is something she probably does carry around with her. I believed it when she said any chance her and her boyfriend have to get away from the kids, they go at it.

I pulled a pair of boxers out of the purse, which did not belong to my boyfriend, by the way, but I thought I articulated a pretty good answer on the spot. When Karolina asked who my celebrity crush was, it was honestly a no-brainer. However, Jen did not seemed impressed with my answer about how I would react to Jared Leto hearing he was my crush and then seeing him on the red carpet a week later. Maybe I should have said, “I’d probably faint if I saw him on any carpet, anywhere,” instead. Oh well, hopefully Jared watches the show, then all of that would be worth it. Zi Lin ended up winning the challenge with her Chinese charm. Good on her!

Next up was the campaign. We were to walk a red carpet in gowns designed by Guido Maria Kretschmer, while talking to fans and the paparazzi. First off, let me just say I died over everyone’s gowns. They were all SO beautiful, I truly wanted to steal mine. I was in love with that black beaded masterpiece. Devyn and Zi Lin also had really amazing dresses.

Stephanie and I were both up on our talk shows, so we both greeted Wendy Williams with a big, “How you doin’?” Wendy cut straight to the chase and asked me why I should be the face of Ulta beauty. It honestly took me a second to gather my thoughts because no one likes to talk themselves up. It’s uncomfortable and almost always comes off as disingenuous so I basically said I am always willing to learn and grow as a model, and that I just want to get better.

I now realize that totally didn’t answer her question but I’m happy with that over something like, “because I’m beautiful and makeup looks really good on me,” cough, Jocelyn. Stephanie went next and being the eloquent speaker that she is, answered her questions very well and I thought Team Coco might just have a chance at winning this one.

Karolina’s team went second. Devyn looked absolutely radiant on the red carpet and Ebony’s smile shined brighter than the sequins on her dress. Wendy asked Ebony some VERY personal questions about her children and their fathers, but Ebony answered with poise and class. She did an amazing job.

When it came to Devyn, Wendy asked how she felt about working as a black model and Devyn responded with, “I don’t really see myself as a black model.” I think we were all a little confused by her answer but Naomi was outright shocked. She said Devyn was black and what she said was a disgrace. Devyn quickly clarified her statement by saying she felt like she has an “international look”. Naomi still didn’t seem satisfied with her answer in the end. It was not looking good for Team Karolina.

Keep reading to find out who was sent home >>