Is Matt Lauer to blame for Ann Curry being fired from TODAY? Yes, in a roundabout way, according to New York magazine writer Joe Hagan, who has taken a lengthy look at the peacock network’s morning show drama. 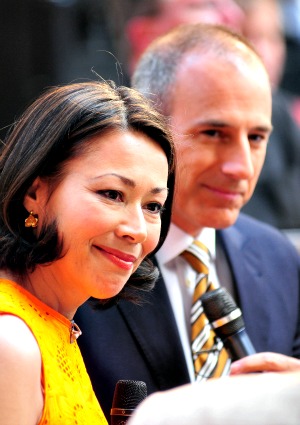 After much speculation and endless gossip, it seems Ann Curry‘s ousting from TODAY can be boiled down to a simple lack of chemistry between the much-loved newbie and morning show veteran Matt Lauer.

In an in-depth look at NBC’s drama, Joe Hagan explains in a piece for New York magazine that if hosts can’t get along convincingly, one of them simply has to go.

“Everybody at NBC, everybody at the Today show, everybody understood that Ann was kicked out of her position because Matt didn’t want her there,” a prominent NBC staffer told Hagan. “That’s why it was so personal between Ann and Matt.”

Don Nash, executive producer for TODAY, concurred, explaining, “You can’t fake it for very long that early in the morning. I think viewers have a sixth sense about all that. If your two anchors don’t like each other off the air, they’re not going to be fooled if they love each other on the air.”

Though there doesn’t seem to be an exact reason 56-year-old Ann Curry and Matt Lauer failed to spark, their awkward relationship dates back to day one.

“Off air, Curry and Lauer had no relationship and barely spoke,” Joe Hagan wrote in the piece published Sunday. “When she started, Curry had asked Lauer out for lunch to get advice, but Lauer seemed to drag his feet scheduling it and Curry felt he didn’t offer much… with Curry, who threw off his rhythm and also threatened his dominance of the hard-news stories, he could often look sour.”

It seems Curry’s role on the show could have been saved if Lauer had stuck to his plans of “downsizing his work life, playing more golf, spending more time with his kids in the Hamptons.” However, the 55-year-old ultimately decided to stay, snagging “a reported $25 million a year to work four days a week.”

“At the moment when he had maximum leverage with NBC, Lauer, as the multimillion-dollar megastar, could easily have saved her — but he didn’t,” Hagan explains. “To the contrary, in signing a new contract to remain at the show for at least two more years, he tacitly ratified the plan to remove her.”

“It was a hard time for everybody,” Matt Lauer commented previously of the drama surrounding Ann’s leaving. “I don’t think the show and the network handled the transition well. You don’t have to be Einstein to know that… We were seen as a family, and we didn’t handle a family matter well.”