Super busy supermodel Naomi Campbell tells SheKnows why she reminds her girls that, in business, it’s not about making friends. 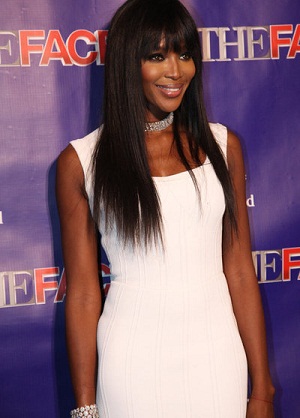 We really admire Naomi Campbell. Since the very beginning of her career, Campbell has known what she wanted out of modeling and life. She’s gone after it and hasn’t let anything get in her way. We aren’t ignoring the nasty rumors. She’s had her moments. But who hasn’t?

Whether she was throwing things or just putting her foot down to get what she wanted, she was going to be labeled a b****. Not because she’s Naomi Campbell but because of an epidemic that plagues our society.

It’s completely acceptable for men to be firm and headstrong, but apparently it’s heinous from a woman. So, we love our supermodel because she’s never seemed to care what they say about her: She’s fought for her success (and her show) and she’s gotten it.

That’s why we loved hearing what she had to say during a recent interview.

“As I told my girls from the get go, ‘No one is your friend,'” she told us. “They realize they’re not there to make friends — It’s a competition. …Each and every one of you are against each other. “

That’s good advice. Not just for wannabe models, but for all women trying to succeed in their chosen profession. Stop apologizing for being headstrong or going after your dreams. Do it. Even if it leaves a path of almighty destruction in your wake.

Campbell also addressed the drama between the girls and judges on The Face and laid it all out rather plainly.

“They’ve got to learn to separate it. Each one is an individual and that’s what you get,” she said with a laugh. “It’s not that I don’t have any empathy for them, what they’re saying and what it’s about. But what this is to me is a business. It’s a competition. It’s a show called The Face. I don’t wanna take up the time and them not get in what they can out of me to help them in what they want to do.”

Naomi Campbell is looking for the next Face >>

The supermodel-turned-modeling-coach and executive producer sure can preach. Our favorite advice, though, was all about sucking it up. In business and in life, you’re going to be asked to do plenty of things that aren’t your cup of tea. If you want your dream bad enough, you’ll grin and bear it.

“I said, ‘Jocelyn, I know you don’t like meat but even if they give you a piece of red, raw meat I want you to hold it and smile.’ And so of course she made the face of, ‘But I’m a vegetarian!’ and I said, ‘That’s a face I don’t want to see. I wanna see you smile, you have to be delightful,’” Campbell said.

And those, ladies, are Campbell’s three keys to success in finding your dream. Who are we to argue? That perky woman we talked to sure seems to have everything she could ever want.

To see how her advice pans out for the girls on The Face, tune in to the finale on Tuesday 9/8c.