RiRi is not exactly known for punctuality, often showing up late for concerts and appearances. But keeping a crowd of high school do-gooders waiting for more than hours — that takes the cake. 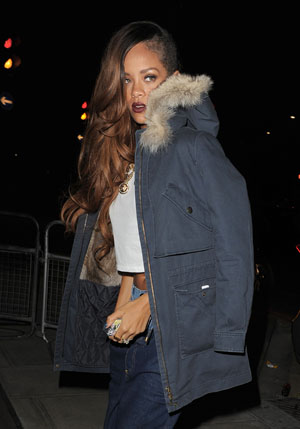 A group of Chicago high school students who won Rihanna‘s “Shine Bright Like a Diamond” video contest won a dubious reward: An appearance from the Barbadian singer that was hours late.

According to the Chicago Tribune, students at Barrington High School won the contest, which sought “the most creative and inspiring lip dub or video that includes a giving back to your community (and world!) message.” The students made a montage of their charitable work, set to Rihanna’s song “Diamonds.”

Along with VIP passes to Rihanna’s concert at Chicago’s United Center and autographed posters, the winning students won a Q&A with the singer, to take place at the high school last Friday.

Rihanna showed. But only after making the crowd of high school students wait for hours.

“I think it’s very rude of her to do this,” Barrington High School junior Megan Defeo told Chicago’s ABC affiliate, WLS-TV. “We worked really hard on our video and to win this contest, and so for her not to show up after all of this is really rude and disrespectful of her.”

The crowd of 2,500 students (according to TMZ) were jammed into a high school gymnasium waiting; the singer tweeted “This Chicago traffic is not working” en route to the event.

Also according to TMZ, Rihanna’s only reference to her lateness was to tell the crowd, “Thank you guys for coming and waiting.”

It probably didn’t help the waiting students’ mood that Friday was what the Chicago Tribune called a “nonattendance day.” Ugh, so those kids wouldn’t have even been at school if Rihanna wasn’t going to be there? She had them waste almost an entire day off? Double ugh.

The Tribune also notes that the event was free to the school, except that the district would pay overtime for three area police officers for extra security. OK, so three police officers at more than four extra hours, how much does that cost?

Rihanna, famously so late and unavailable during her recent 777 Tour that journalists aboard a plane rioted and wrote simply awful stories about her, has also missed two shows on this tour (due to laryngitis), and didn’t start Sunday’s show in St. Paul, Minnesota, until 9:50 p.m.