The Following, starring cinematic staple Kevin Bacon, proves the movie industry is struggling. Bacon follows a long line of big screen heavy-hitters who have moved to TV for steady paychecks and guaranteed work; Alec Baldwin, Charlie Sheen, Ashton Kutcher — even wife Kyra Sedgwick. In celebration of getting to see Kevin more often, here is a quick look at just a few of our favorite pieces of Bacon… 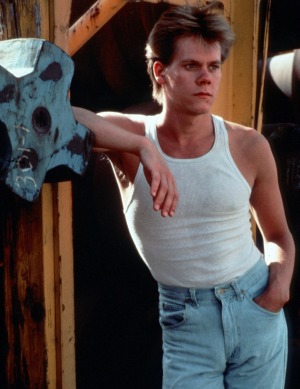 In one of Kevin’s few leading roles, he plays the ultra cool Ren McCormack in this ’80s classic (please note photo of Kevin in his inappropriate “mom jeans”).

Ah, for the days of white Nike’s with the red swoosh — or in the case of this movie, red cowgirl boots. Yes, we may have questioned Ren’s fascination with the bratty and rebellious Ariel, but we never questioned how he looked in that white T-shirt and those faded jeans.

We’re sure a few scenes from the original Footloose make Kevin cringe, but our inner 15-year-old will forever say “Amen” when Ren sticks it to Ariel’s preacher dad by using a Bible verse to prove his point…

What’s the most memorable part of A Few Good Men? Demi Moore with short hair? Tom Cruise going up against the formidable Jack Nicholson’s Colonel Nathan R. Jessup? Nicholson’s spit-spewing rant that made “You can’t handle the truth” the everyday catchphrase that it is? Nah. It’s Kevin Bacon in a buzz-cut and uniform as Captain Jack Ross, prosecuting attorney of two Marines accused of murder. Captain Jack Ross, we salute your subtle hotness in A Few Good Men. (It’s of interest that two other actors from this movie, Kevin Pollak and Kiefer Sutherland, also made the move to television. Apparently, the Marines aren’t the only thing in need of a few good men.)

“Houston we have a problem… with the spacecraft. But I’m still in a movie with the wickedly good-looking Kevin Bacon, so I’ve got that going for me.” OK, so we added the last part. But seriously, if we’re on a spacecraft that may or may not make it back to Earth, can our last days at least be spent with hunks like Bacon and Bill Paxton? Generally speaking, little boys want to be astronauts, and girls want to get with astronauts — or the guy sitting at the controls at NASA if he looks like Ed Harris. This movie has it all — astronauts and drama with a healthy dose of tear-jerking/edge-of-your-seat moments.

Sorry kids, but you really can’t call yourselves Meryl Streep or Kevin Bacon fans until you’ve seen The River Wild. Yes, the trailers make it look cheesy, but it is one of the most memorable flicks you will ever watch (plus, Kevin Bacon is shirtless in this movie). For those of us who fly fish on rivers that look like this, all we ask is if a bank robber decides to kidnap us, can he please look like Kevin Bacon without being that creepy? Thank you.