Revolution makes its long-awaited return tomorrow with a war, a handful of killings and a love triangle all unfolding in just the first eight minutes. 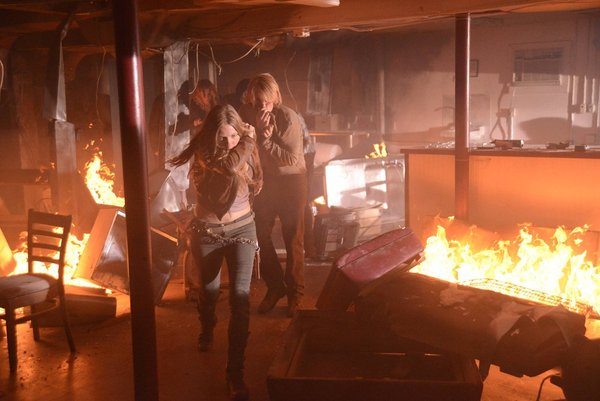 The new episode of Revolution is almost here. In the meantime, NBC has released the first eight minutes of the show. They are chock-full of action and drama that’s sure to continue the rest of the season.

Monroe (David Lyons) has a pendant and with it the power he needs to operate his helicopters and take out the rebel camps. He intends to extend the Monroe Republic from “sea to shining sea,” starting with Pennsylvania. He sends Neville out to complete the mission and is sure to add that Miles (Billy Burke) is to be shot on sight.

Do you think you can survive Revolution? Find out with our quiz >>

Monroe almost takes out Charlie (Tracy Spiridakos) and the rest of the rebels in her group within the first two minutes of the episode. Luckily, the group finds an old restaurant and a walk-in freezer that protects them from the helicopter missiles.

A rebel camp in West Chester, Pennsylvania, isn’t as fortunate. They are Monroe’s first targets after he enacts his plan. Completely taken off guard by the sight of an operating helicopter, the rebels don’t even have time to react before they are gunned down mercilessly.

Meanwhile, Charlie, Uncle Miles and the rest of the revolutionaries are able to escape Philadelphia with the use of a few coffins and Charlie’s new Monroe scar. (I bet it won’t be the last time we see her use the brand to trick Militia officers.)

Once the group is safe, Danny and Rachel hug it out with Charlie while Nora kisses Miles ardently — an affection he doesn’t readily return. Instead, as Nora kisses him, he opens his eyes and peeks at Rachel who is watching them kiss. Awkward to say the least. There is definitely history, and we are definitely sensing a love triangle blossoming. I wonder how they’re going to explain the Miles and Rachel relationship, given that Rachel was married to Miles’ brother. When did this relationship develop? Ben, Rachel’s husband, didn’t die until well after Rachel had left the family. Perhaps it took place while the Militia was holding Rachel before Miles abandoned Monroe?

Before we get more than an awkward glance between Miles and Rachel, Aaron confronts Rachel about the pendants. She doesn’t want to talk about it, but he insists that the group deserves an explanation. Charlie agrees with Aaron.

But Rachel is saved by the thrumming beat of an overhead chopper. The group realizes it’s heading in the direction of one of the rebel camps.

No doubt they will discover Monroe’s plan for wiping out rebels soon enough.

The fight against Monroe is bound to grow along with key characters. Miles will become a general again, but this time he’ll be fighting against the Militia. Charlie will also come into her own. Revolution gave viewers enough time to breathe during the break. Now the action begins.