The actress took the weekend off to rest, but did it in a glass box in front of some surprised art lovers.

Related story Celebrities You Had No Idea Were Related to Royals 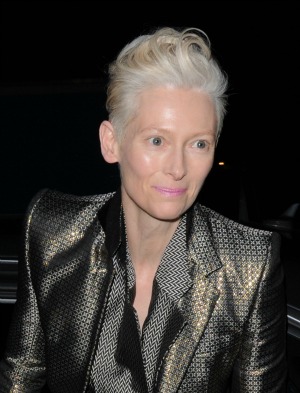 Tilda Swinton has always been a little out of the ordinary and this weekend provided another look into her kooky personality.

The actress installed herself into an art exhibit at the Museum of Modern Art in New York on Saturday, inside a glass box.

“Photos of the Burn After Reading actress, posted on a web site called Gothamist, showed Swinton wearing shoes, a light blue shirt and dark blue pants, lying on white bedding with eyeglasses beside her,” said Reuters.

Swinton was reportedly taking a nap within the clear exhibit.

“Living artist, glass, steel, mattress, pillow, linen, water, and spectacles,” said a description card of the performance, according to Reuters.

This isn’t the first time Swinton has performed “The Maybe” though. She also made an appearance during its premiere in London, almost 20 years ago.

“The live art piece – a collaboration with friend Cornelia Parker – debuted at the Serpentine Gallery in London’s Hyde Park in 1995. It was repeated a year later at the Museo Barracco in Rome,” said the UK’s Guardian.

According to the New York Post, at her 1996 performance in Rome, she took an hour break in the middle of the performance, but left a note that said “Siesta”. The art lover also showed up dressed as David Bowie to an art exhibit earlier in the week in London.

The Museum of Modern Art tweeted a link to the story by Gawker.com about the performance, with the comment, “Earlier today …”

They also released a statement to the Guardian on Sunday in response to the request for a performance schedule of the piece.

“An integral part of ‘The Maybe’s incarnation at MoMA in 2013 is that there is no published schedule for its appearance, no artist’s statement released, no museum statement beyond this brief context, no public profile or image issued,” the museum said in the statement. “Those who find it chance upon it for themselves, live and in real – shared – time: now we see it, now we don’t.”