You should have absolutely no reservations about DVRing every single episode of Tony’s new show: Anthony Bourdain: Parts Unknown. 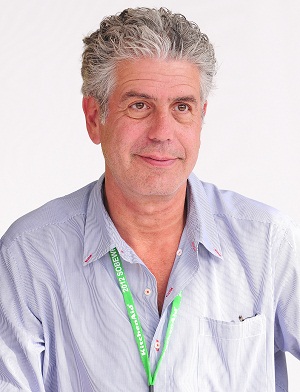 Our favorite BAMF of a chef, Anthony Bourdain, returns to television in mid-April. We’d do a dance, but that would only bring his disdain. Tony fans know that’s equivalent of burning in hell. So, deep breath. And…

Bourdain’s other awesome show, The Layover >>

Last year, world-famous chef, traveler and best-selling author Anthony Bourdain ended his show No Reservations and left the Travel Channel for bigger and better things. Read: He moved to CNN. Travel Channel gave the long-time mocker of the whimpy recipe shows that litter Food Network nearly free rein in choosing the places he’d visit and the local delicacies he’d shove into his mouth. No Reservations was not a show for the faint of heart (or stomach) or people with manners like the queen’s. It was for people who slurp, chomp and rumble happily over foods that normal humans would find stomach turning. (Bright idea: CNN should do a health special where a doctor takes a look at Anthony’s heart and intestines.) When he wasn’t stuffing his face, Bourdain made sure to fill the show with commentary on the political and social climates of the places he visited, too.

It was never enough, though. He wanted to share more and needed more access. Bourdain visited Beirut, Lebanon, in 2006 and found himself caught in the midst of an intense conflict. As the cameras rolled, there was no way to miss the feeling that he was itching to escape his hotel and wander into the thick of it. Our Ramones-loving chef seemed suddenly very interested in combat reporting.

We seriously loved The Layover >>

Anthony Bourdain: Parts Unknown starts on Sunday, April 14, at 9/8c on CNN. The first season will find Bourdain in places like Libya; Colombia; and Tangier, Morocco as well as up the Congo River (presumably with a paddle).