The race for the cure is in full swing when the group divides in three groups vying against one another in a scramble to find Katherine first. 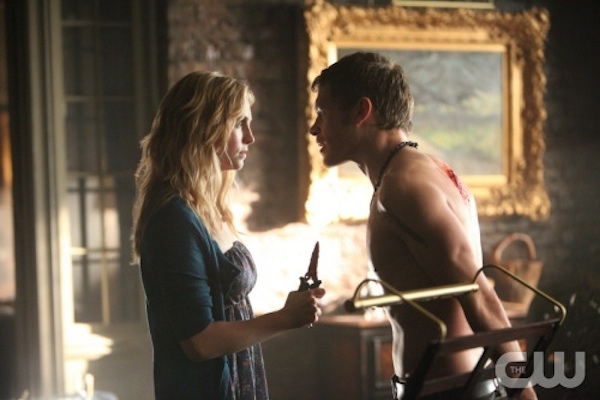 This week on The Vampire Diaries, the race for the cure is heating up. The group has divided into three groups vying against one another. Each has a motive for finding the cure.

We didn’t see this pairing coming at all. But now that emotionless Elena (Nina Dobrev) and Rebekah are chumming up to one another, we think the team kinda works. They’ve got this whole strong, independant woman thing that’s hard to resist cheering for.

Elena and Rebekah are after the cure together. Elena doesn’t want to take the cure, and she knows if the brothers find it first, they’ll force her. Rebekah, on the other hand, wants the cure for herself. So the two ditched Damon (Ian Somerhalder) in the last episode and went off on their own.

By the looks of the preview, Elena and Rebekah get to Katherine first, and Katherine finally gets the tables turned on her like she deserves. She is, after all, the reason Jeremy is dead.

Then there’s Klaus (Joseph Morgan). Just when it looks like he’s about to join the good guys, Silas shows up with a white oak stake and squishes that glimmer of hope. Klaus is forced back to the bad. Silas is fully prepared to use the white oak stake unless Klaus finds and brings him the cure.

No word yet on the context of the clip between Caroline and Klaus, but from the looks of the preview she’s got him all tied up. And she’s mad. She says, “I will bring you nothing but misery.” Could Silas have ditched Shane’s form and replaced it with Caroline’s likeness?

Damon has given up on Elena having fun, and now he’s mad. He’s joined Caroline and Stefan (Paul Wesley) to find the cure. He’s ready to hunt Elena down and make sure she and Rebekah don’t get the cure if for no other reason than the fact that he doesn’t want to let her win now that she’s stabbed him in the back.

A bit vindictive, but that’s the Damon we love.

So there are the teams for next week’s episode. Who’s your money on? Tell us in the comments!