Rick and his team must decide whether sacrificing Michonne to the Governor is worth it, and Merle (gasp!) grows a conscience. 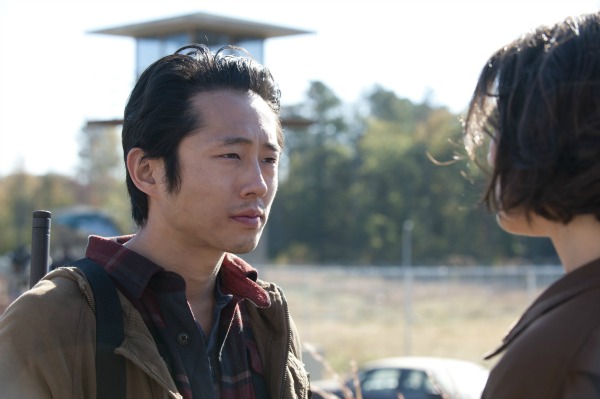 Check out three preview videos for The Walking Dead‘s “This Sorrowful Life” and see how Merle might actually end up being the voice of reason.

In the preview video, we see that Rick is once again being visited by ghosts. Lori appears in regular clothes and not in a flowing white dress though, so that’s something. We also see that Rick has decided that the only way to save his people is to give Michonne to the Governor. Merle is dealing with his own dilemmas and might just be wondering if he chose the right side or not. Plus there’s a live (sort of) zombie head on the ground. If all of that doesn’t make for what looks like another fantastic episode, I don’t know what does.

In the first sneak-peek clip, we find Glen securing a section of the prison when Daryl comes out to join him. Daryl asks Glen if he’s seen Merle, and when Glen doesn’t respond, Daryl starts making promises about how he’s going to make his brother make things right. Glen is having none of it, but not because of the fact that Merle tied him up, beat him senseless and threw a walker in the room. It’s because Merle gave Maggie to a man who terrorized her and Glen definitely cares more about Maggie than he does about himself. Daryl looks contrite, but he really has nothing to say in reply.

In the second sneak-peek clip, we find Merle and Rick having a heart-to-heart. Surprisingly enough, Merle is defending Michonne and pointing out to Rick why giving her to the Governor is wrong. Merle lists all of the things that Governor is likely to do to Michonne, and the scary thing is that we all know he’s right. Merle tells Rick that it’s not worth doing that to her over just a mere shot at survival and calls him “cold as ice.” The most interesting part of this scene might be the fact that we’re completely on Merle’s side by the time it’s over.

The Walking Dead recap: Andrea is in trouble >>

Do you think Rick should sacrifice Michonne? Or do you think Merle is right to call him cold-blooded for even thinking about it?