DJ Steve Aoki talks to us about working on his latest album, heading out on tour this year and all the various ways he’s donating to charity. 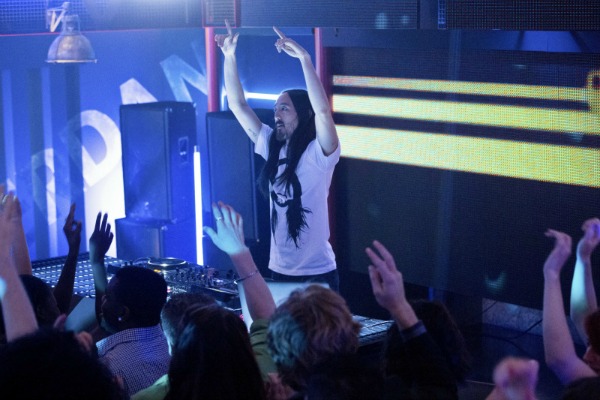 Steve Aoki is a very busy man. In addition to guest starring on an episode of Arrow this week, he’s also been working on his next album, launching a new tour, helping his fans donate to charity, helping his friends to become more healthy and working on some TV shows exclusively for his YouTube channel.

With a schedule like that, it’s hard to believe the man has time to breathe, let alone chat. But SheKnows was lucky enough to steal a few minutes of Aoki’s time to talk about everything on his plate for the coming year.

Justin Timberlake promises more music is on the way >>

SheKnows: What’s happening with your new album and tour?

I’m touring relentlessly. I live in Los Angeles., but every month I only have about one or two days in Los Angeles. I did about 300 shows last year around the world, and I’ll probably end up doing close to the same this year. I’m also doing a three-week bus tour across the U.S. in April, then here in Miami.

SK: Can you tell us about the charitable fund that you set up?

SA: I had been trying to put this together for a while, and it took me about a year because I’m so busy. Last year, I did a big birthday bash for my annual Los Angeles show, where I introduced the fund. I wanted it to be more interactive with my crowd, because I want my crowd to be involved with what I’m doing. Everything I do is about the interaction with the crowd. So I took a dollar from each ticket sold at that show and put it into the charity. I’m going to start doing that at all of my shows.

That way everyone is involved in raising money for a charity that they can actually vote for. So at the end of this year — and I’ll do this every year — I’ll pick five charities and then everyone can vote for where the money will go. I’m just trying to get more people involved and make it more like more of a crowdsourcing experience. Because you can have fun at the shows and go wild and crazy and enjoy your time, but at the same time you can be supporting communities and people who need help, or help research that needs money. You won’t even know it, but you just did it.

SK: Sounds like you’re really busy. What else are you up to these days?

SA: There are some other personal things I’m doing, like I’m really into fitness, and I’m getting all my friends healthy by working out and eating healthier. So I have all of these workout bets. I have about 15 of them going on with different people. So by the end of the month, if they don’t keep up with their workout plan — by working out so many times a month — they actually have to pay the fund. And if I don’t keep up, I have to pay the fund. I’m just trying to find every possible way to raise money that I can.

SK: Are you designing the workouts?

SA: I’m really into Insanity, and I’m a really big Shaun T. supporter. I do that all of the time in my hotel room, so we’re trying to find some funny viral ways to share that.

On my YouTube channel this year, we have five new TV show concepts that I’m going to do. They are really funny, and I can’t wait to start debuting stuff on my channel. One of them is going to be some weird workout thing that we’ve been talking about.

It definitely sounds like Aoki is one of the busiest men in music!

What do you think about his upcoming album and tour, plus all of his charity work?