On Thursday night, Selena Gomez revealed her love for Hooters thanks to her dad, who used her as a wingman back when he was single and on the prowl. 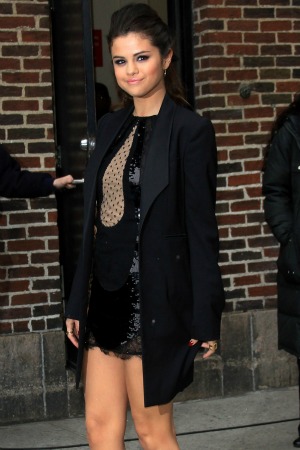 Have you ever acted as a wingman for your dad? That’s exactly what Selena Gomez did as kid with her single father when he took her to Hooters.

Gomez was on Chelsea Lately on Thursday night to promote her latest film, Spring Breakers, with co-star Vanessa Hudgens, when the story was revealed.

Chelsea Handler addressed the topic with the actress, “I also know your history of your love for Hooters. You spent a lot of time going to Hooters. I don’t see any hooters on you.”

The audience laughed while Gomez grabbed her chest and smiled.

Handler probed, “You spent a lot of time there. Why do you love it?”

That’s when the audience received a surprising answer.

The former Disney star said, “When I was younger, I think my dad wanted me to be a boy.”

The quick-witted talk show host jumped in with, “Or a Hooter.”

The 20-year-old actress continued, “And so I’d go to Hooters to watch the Spurs game, and all the waitresses would come over and I’d color them pictures. So I was kind of, like, bait for [her father] in a way. It was cool.”

It was cool because Handler confirmed that her dad was indeed single at the time of the Hooters outings. There’s nothing like getting a date over a basket of chicken wings and fries!

The topic then naturally turned to Gomez’s current dating status which she revealed is: single.

When asked if she is enjoying her current date-free life, the Wizards of Waverly Place star confidently replied, “Yes, I really am.”

That’s when Handler offered up this advice: “You better enjoy this, girl. You’re 20 years old. You got a lot of men ahead of you.”

Even if she doesn’t have a lot of men ahead of her, Gomez does have a movie opening ahead of her. Spring Breakers will be released nationwide on March 22.

7 mins ago
by Alyssa K. Davis