Fall Out Boy’s new album is quickly becoming a media event, and the A-list names being added daily are impressive. 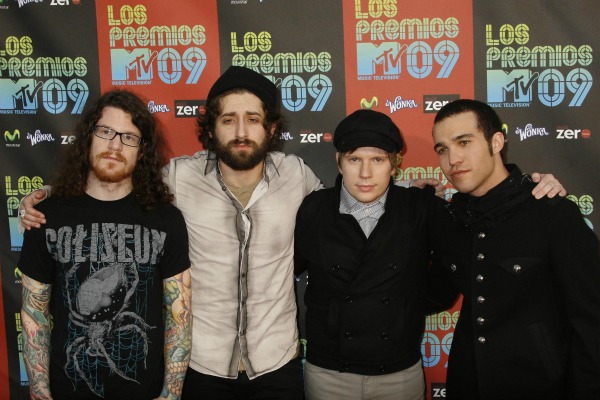 Fall Out Boy is saving rock and roll, and now we know they’ll have a lot of friends with them along the way. The band’s fifth studio album, Save Rock and Roll, is quickly becoming one of the most anticipated albums of the year, and they’ve announced the celebrity collaborators who are joining the effort.

Fall Out Boy falls back together >>

The first unexpected guest was 2 Chainz, who appeared in the video for the first single, “My Songs Know What You Did in the Dark (Light ‘Em Up).” But on Wednesday, band member Pete Wentz tweeted a hint to another guest artist.

“Wanna guess what blonde hair singer we got on the record?” he asked.

The tweet was quickly followed up by a six-second YouTube video tweeted out by the band, showing an image of none other than Hole lead singer Courtney Love.

“Comprised of a quick-cut of classic images of Love in her grunge goddess heyday alongside late Nirvana frontman husband Kurt Cobain, the clip features the Britney Spears-baiting tagline, ‘It’s Courtney Bitch’ splashed across the screen,” said MTV. “It also appears to offer a sneak preview of the collabo in the form of the drumstick rattling shout-along chorus, ‘Rat a tat tat, rat a tat tat.’”

Lead singer Patrick Stump had earlier hinted that Sir Elton John would also appear on the album, after he tweeted a photo of himself and the singer in the recording studio. The photo was hashtagged with “#saverockandroll” and “#sireltonjohn.”

The new album is the first by Fall Out Boy since the band took a break after their 2008 album Folie à Deux. Fall Out Boy wants to make sure everyone knows this won’t be the same old band. After all, they’re now all grown up, many of them married and with kids (and some, like Pete Wentz, divorced).

“We didn’t want to come back just to bask in the glory days and, like, and collect a few checks and pretend… and do our best 2003 impersonation,” lead singer Patrick Stump told MTV. “We wanted to do something that was us now. And if it weren’t right, we weren’t going to do it.”

The band will also hit the road to support their new album. Their U.S. tour will kick off May 14 in Milwaukee and will take them around the country throughout the months of May and June. Save Rock and Roll will be out April 15, 2013.