Another hot young thing’s been added to the rumor mill for Fifty Shades of Grey. Stephen Amell, who recently broke out with The CW’s Arrow, admits that he’s up for the role. 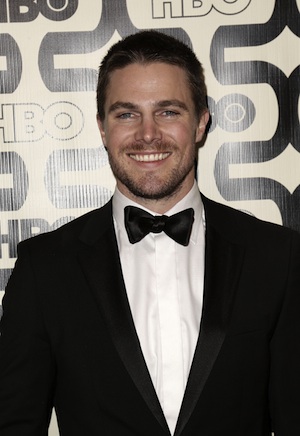 Everyone under the sun has been rumored for Fifty Shades of Grey. It’s the movie that keeps on giving. We’ve heard everything from Ryan Gosling to Ian Somerhalder, but the latest candidate is of superhero legend.

According to EW, Stephen Amell is up for the role of Christian Grey. The actor, who headlines The CW’s Arrow, has confirmed that he was approached and has met with producers of the film.

Could the Huntress be Arrow’s new lady friend? >>

So there you have it: he, too, is being courted by the powers that be. Last year, after the steamy novel’s overwhelming success, Universal Pictures picked up its film rights. Ever since, it feels like every Hollywood actor’s been rumored for the roles of both Christian and Anastasia.

Recently, Emma Watson blew off reports that she was in talks for the female lead. She tweeted, “Who here actually thinks I would do 50 Shades of Grey as a movie? Like really. For real. In real life.” She followed it up with, “Good. Well that’s that sorted then.”

Do you think Amell would make a good Christian Grey?