There must be something in the air at NBC. Jay Leno and Jimmy Fallon aren’t the only ones being affected by The Tonight Show shake-up. Saturday Night Live’s Seth Meyers has been pulled into the drama. 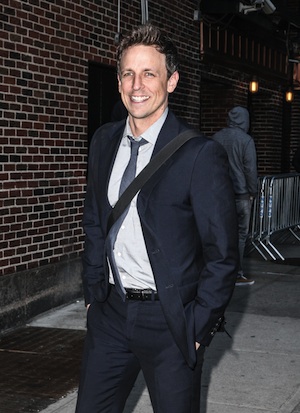 We’re in the middle of a late-night shuffle. A few years ago, we experienced something similar with Jay Leno and Conan O’Brien. The former was being pushed out of The Tonight Show, while the latter was being groomed as his successor.

Unfortunately, things didn’t go according to plan. Leno returned to The Tonight Show after O’Brien spent less than a year at his desk. It was one of the most talked about recoups in TV history. Now, Leno’s at it again. This time, it seems to be legit.

There have been reports that NBC is looking for Jimmy Fallon (who replaced O’Brien) to take over The Tonight Show. The 62-year-old Leno is bowing out of his position. If Fallon goes there, who’ll rule Late Night With…?

The New York Post believes the new guy will be another Saturday Night Live alum, Seth Meyers. He’s currently the head writer at the sketch show, but a source says he’s the top choice.

“Lorne Michaels wants Seth to take over from Fallon. It would be perfect for him. Tina Fey’s name had also come up, but she has said she was too busy to do it.”

This isn’t the first time Meyers has been the talk of talk. He was previously in the running to co-host Live! alongside Kelly Ripa, but the job went to Michael Strahan. NBC plans to unveil its new Tonight Show to advertisers in May, with Fallon debuting in 2014. But will it really happen? Stay tuned!

Do you think Seth Meyers would make a good host?