The study group splits up to tackle new projects, like whaling, P.E. and becoming and a frat boy. 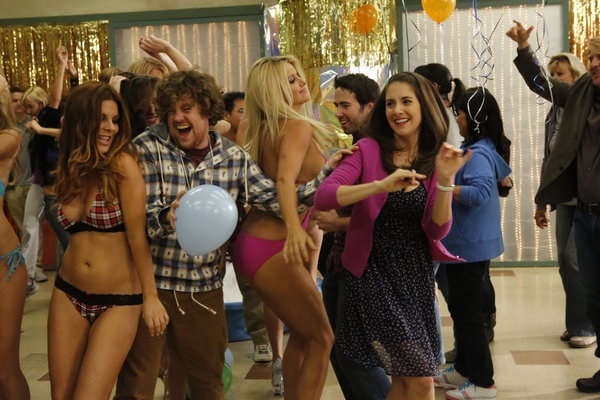 It’s time for the Greendale study group to expand their education to… whaling? Well, not quite so literally. In tonight’s episode, Dean Pelton has his eyes set on catching a large whale (a.k.a. a wealthy individual who could become a student).

The Dean can accomplish little without the help of Jeff (Joel McHale) and his friends. Let’s be honest, parading around in crotch-revealing skin-tight dresses is probably not the best way to attract higher income students (unless they go for that sort of thing, you never know). So, the Dean makes the wise move of enlisting the help of ultimate salesman, Jeff, and the two most attractive girls on campus, Britta (Gillian Jacobs) and Annie (Alison Brie). I wonder what those three will get out of the deal?

Meanwhile, Shirley (Yvette Nicole Brown) and Troy (Donald Glover) will embark on a new learning experience by teaching others. The duo will be instructing their own physical education class. Rumor has it Shirley will be surprisingly fit and killing it in the class, while Troy struggles to keep up. For a guy with an athletic past, the humiliation of being beaten by an older more curvaceous woman is bound to throw him into a full-blown hissy fit. Also, these two rarely have storylines together so it should be fun to watch!

And let’s not forget about Abed (Danny Pudi) being Abed. On tonight’s episode he’ll be creating a new fraternity. Will the hazing process include watching every episode of Inspector Spacetime back to back without and a break and then being forced to have a quote-off with other pledges? Let’s hope so!