Emma Stone wants us to know that she’d never write a weird, cryptic tweet and then delete it. 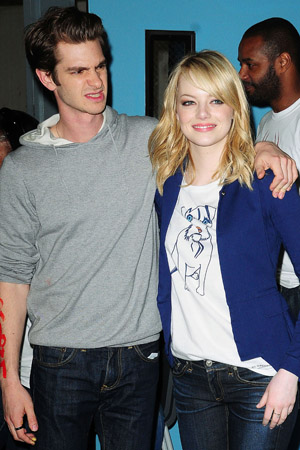 Emma Stone wants us to know two things: She doesn’t tweet — and if she did, she wouldn’t be tweeting anagrams about her relationship drama.

The Amazing Spider-Man actress clarified her stance to Ryan Seacrest Thursday morning while promoting her new animated movie The Croods. Seacrest asked her about the questionable tweet that came from her account a couple of weeks ago.

Emma Stone admits she is “less buxom” than Gwen Stacy >>

In the tweet, Stone purportedly wrote “nawder nas islasehne tsintgi ni a erte” before quickly deleting it. Perez Hilton screencapped the tweet and decoded it to read “Andrew and Shailene sitting in a tree.”

So, is The Amazing Spider-Man 2 co-star coming between Stone and her British beau? Nope.

“I’m glad you asked me about this, I have never tweeted, my friend,” she said. “I’ve tweeted one time to Seth MacFarlane and I said, ‘Me too, oh boy.’ And then I’ve been hacked ever since and they’ve locked me out of my Twitter so I can’t access it because they changed my email and my password so we are trying to figure out how to delete it.”

As for the tweet in question? It wasn’t her.

“I heard the other day they tweeted an anagram about Shailene Woodley who is one of my favorite human beings on the planet… I heard it was an anagram of Shailene and Andrew Garfield sitting in a tree…” she said. “That was the first one I heard and then I heard there was a rich history of other things I’ve tweeted and deleted and I didn’t know about any of this happening because I don’t go on Twitter I just had a verified account but now I want to get rid of it.”

Thank goodness! We love these two together.

Read on for more Emma Stone