Women are flocking to watch AMC’s hit zombie drama. What is it that makes it so popular with the ladies? 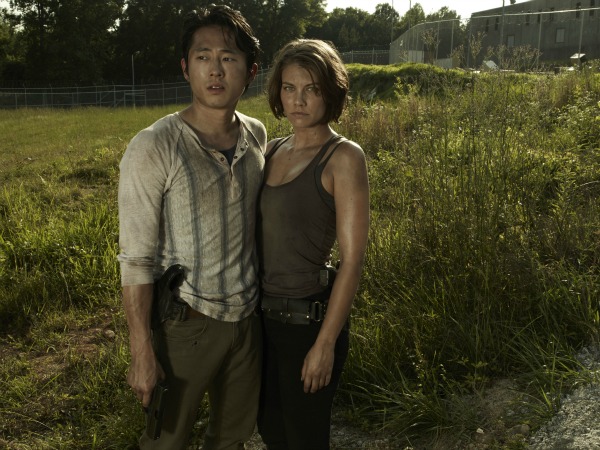 I am a woman and I love The Walking Dead. In fact, I love it so much that one of my best friends (also a woman) and I often sit down to watch it together on Sunday nights. During the episodes we’ll scream at the TV, cower in fear when everyone is being overrun with zombies and of course talk about our appreciation of our favorite characters. You know who doesn’t watch the show with us? Her husband. Turns out he’s terrified of zombies. Go figure.

Why do we love the show? In a recent interview for Access Hollywood, star Steven Yeun theorized on a couple of possible reasons.

“It might be Norman Reedus, Andrew Lincoln — probably those two,” Yeun joked.

The Walking Dead recap: Andrea is in trouble >>

All about the eye candy?

Okay, I’ll be the first to admit that there’s some mighty fine eye candy on the show. Between Norman Reedus, Andrew Lincoln, and yes, even Yeun himself (though he may not have himself on his own list), there’s plenty of good stuff to look at on The Walking Dead. Especially when the weather is hot and they’re handling all those weapons and taking down a bunch of walkers.

But if that’s all there was to it, I doubt I’d stick through episodes like this season’s “Killer Within.” Having hot men on the show doesn’t really matter so much when you have to watch scenes like the one where Lori died giving birth to her baby. So what else is it about The Walking Dead that appeals to the female audience in particular?

I remember the first time I heard anything about The Walking Dead. It was at Comic-Con the summer before the show premiered and I was sitting on the panel for this new show about zombies. I’m a bit of a horror fan so I was a tad interested, but to be honest, I probably wouldn’t have gone to the panel at all if I hadn’t been assigned to cover it for an online TV news magazine.

Before the panel started, they lowered the lights and played for us an extended version of the preview video for the series. Just a few minutes was all it took and I was instantly in love. The preview promised something from a zombie story that I personally had never seen before: drama. The pilot fulfilled that promise when I found myself not only in tears, but actually crying during a scene that featured a zombie. For those of you curious about which scene, it was the one where Rick put the zombie woman near the bike out of her misery with a quiet, “I’m sorry this happened to you.” That just killed me.

A little bit of romance

Another thing this show brings to the zombie genre is a little bit of romance. Glenn and Maggie’s love is a rare thing in the awful world they’re living in, and I find myself rooting for them in every episode. With so many people (including some of the main cast) losing their lives, the chances are always high that one of them will lose the other at the end of the day. So anytime they get a few minutes to themselves, it makes me smile and brings a bit of relief from the usual emotional trauma.

What about you, fellow female fans of The Walking Dead? Why do you think this show manages to resonate with women? What are some of the reasons you personally love it?