When is a museum show the subject of celebrity gossip? When it’s the David Bowie retrospective in London. 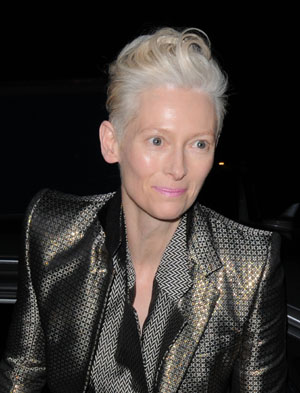 “David Bowie is” is huge. That’s what the response to rock star David Bowie’s career-long retrospective show at London’s Victoria and Albert museum proves, with 50,000 advance tickets sold according to the Los Angeles Times.

The exhibition, “David Bowie is,” contains rare artifacts from Bowie’s personal collection, spanning his years as a fledgling star right through to his ’80s hits and current legend/icon status.

Bowie himself didn’t organize the show; and in fact, the museum doesn’t even know if he’ll show up to see it.

He didn’t even attend the star-studded opening show last night, which featured an appearance by Tilda Swinton, who starred with Bowie as his wife/double/polysexual love object in “The Stars (Are Out Tonight),” the video filmed for the single from Bowie’s latest album, The Next Day.

Rosario Dawson, Bill Nighy and current Dr. Who Matt Smith also made appearances, as did a couple of icons of 1980s music: Marc Almond, best known as the lead singer of Soft Cell (“Tainted Love,” “Sex Dwarf”), and Steve Strange, lead singer of electronic music popsters Visage, which had a hit in 1980 with the club classic “Fade to Grey.”

It was rumored in British Vogue that Swinton would show up to the opening dressed as Bowie. What do you think? Is this a Bowie take, or just Swinton’s usual?

Speaking of Bowie, who wasn’t at the opening (le sigh), Iman told Grazia magazine that her husband may go on the road to promote The Next Day.