Seth Rogen is a man of many talents. The actor is stepping behind the camera for his upcoming film The Interview. Rogen will direct the comedy that could also star James Franco. 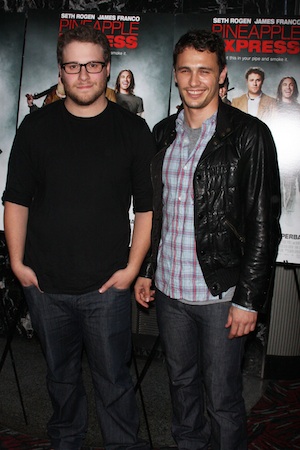 Seth Rogen is no stranger to multi-tasking. He’s already an experienced actor, writer and producer. Now, he’s adding director to his résumé. This summer, Rogen makes his directorial debut with This is the End, which he’ll follow up with The Interview.

According to the Hollywood Reporter, Rogen’s been confirmed to direct, produce and star in the film. It’s a comedy that could reunite him with frequent collaborator James Franco (who also appears in This is the End). Franco hasn’t signed on yet but he’s the top candidate for the lead.

The Interview was written by Rogen and his creative/business partner Evan Goldberg. The story centers on “a handsome talk-show host [possibly Franco] and his producer [Rogen] who find themselves in way over their heads when they get involved in a plot to assassinate the prime minister of North Korea.”

Does that sound outlandish? Absolutely, but so did the plot to Pineapple Express and look how great that turned out. The film is being produced for Columbia Pictures, who are excited for another Rogen-Goldberg project.

While you’re waiting for The Interview to come together, prepare yourself for This is the End. The film stars Rogen, Franco, Craig Robinson, Jonah Hill, Danny McBride, Jay Baruchel and a slew of celebrity cameos. Everyone from Emma Watson (the Harry Potter franchise) to Jason Segel and Rihanna are set to appear.

This is the End hits theaters June 14.

Are you in the mood for another round of Rogen and Franco?