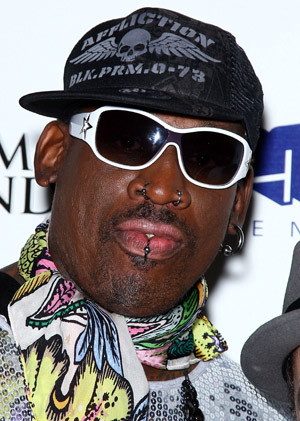 Dennis Rodman made the world more than a bit angry earlier this month when he made nice with North Korean leader Kim Jong Un. But did he just anger his new pal? Maybe.

Rodman, 51, sat down with U.K. tabloid The Sun earlier this week to talk about his trip to the mysterious Asian nation. The most notable revelation? That Un has a baby daughter.

The top state secret came out while Rodman talked about meeting his wife, Comrade Ri Sol-ju.

“She’s a beautiful woman, very elegant and quite tall for a Korean — maybe 5 feet 5 inches,” he told the newspaper. “She kept talking about their beautiful baby daughter.”

But, maybe it’s not such a secret after all, since Un didn’t tell the former Chicago Bulls star not to talk about it. He did ask Rodman to keep some other deets a secret, though.

“The palace was amazing and there was marble everywhere — it was very impressive,” he said. “I won’t tell you if the toilets were made of gold or anything like that, as I promised Kim I wouldn’t talk about that stuff. There is a lot of stuff I can’t talk to you about.”

Dennis Rodman is so broke he might go to jail >>

Rodman went on to explain that Un just wants peace. Like, serious, guys: He’s just a guy who loves peace and basketball… honest!

“Kim is not one of these Saddam Hussein-type characters that wants to take over the world,” he said. “He doesn’t want to kill anyone — he wants to talk peace.”

“Listen, you have to remember that he is just a goddamn kid. He’s a cool guy who wears everyday, regular clothes and likes music and sports and stuff. His grandad built all this s*** and then his dad built some more s*** but he is a normal guy,” he continued.

“Kim’s not talking about war. Have you seen him talk about going to war? He wants to talk peace — he is serious about that,” he said.

“If he wanted to start a war he would have done it already.”

Hey Dennis, you must have missed that whole thing last week when he threatened to nuke the United States. Must have been because you’re too busy jetting off to Rome to play around in the Popemobile.