Come August, Joy Behar’s voice will depart from the tumult on The View. Who will be chosen to join Barbara Walters , Whoopi Goldberg, Sherri Shepherd and Elisabeth Hasselbeck on the sectional couch? 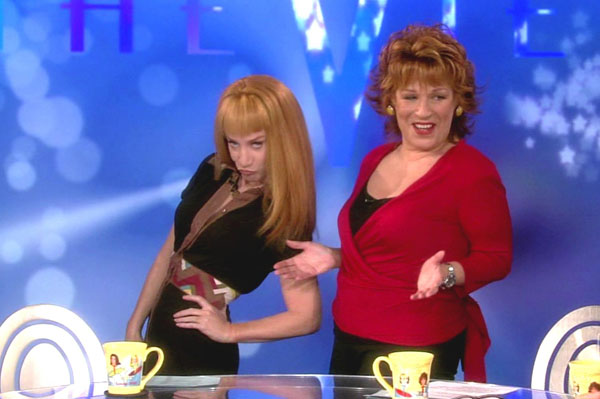 Please, please, let it be Kathy Griffin. That’s what fans of the outspoken comedian are praying this morning, as rumors fly about potential picks to replace Joy Behar when she leaves the morning talk show The View in August.

Entertainment Weekly recommended Griffin as “another feisty red-headed comedian” for Behar’s replacement; Huffington Post called Griffin “Joy 2.0.” But the New York Daily News points out that Griffin is a thorn in Barbara Walters‘ side, having been banned several times from appearing on The View by Walters, according to Griffin.

The Daily Mail reported March 12 that an ABC source said the net was looking for someone “outspoken and passionate,” but the Mail also reported that said outspoken, passionate person would be a conservative Latina, with The View looking to lure both right-wingers and the more than 50 million Latinos in America.

Elisabeth Hasselbeck out too? The View loses one more >>

The Mail pinned most of its speculation on Rachel Campos-Duffy, who came to prominence on The Real World: San Francisco, and is married to another Real World alum, Republican member of congress Sean Duffy.

Other reports have pinned speculation on Brooke Shields. The 47-year-old mother of two is what the New York Daily News calls a “reliably competent” host who has hosted many times before, and is a non-controversial crony of Barbara Walters, who produces The View. But you know. Meh. Competent? Meh.

A wild card in the replacement game: the Daily News throws Sarah Silverman’s name into the mix, quoting Hollywood.com senior writer Brian Moylan: “Silverman’s comedy makes people a little uncomfortable — it’s about provoking, by using stereotypes and people’s preconceived notions about race and class. It’s especially perfect for a show like The View, where they’re talking about those things every day. Joy used her humor to defuse the argument — ‘Oh, haha, here’s the joke!’ — but Silverman would take the conversation to another level.”