Adele, partner Simon Konecki, and 5-month-old son Angelo is all the happy soul singer is working on right now, getting cozy in Brighton, England. 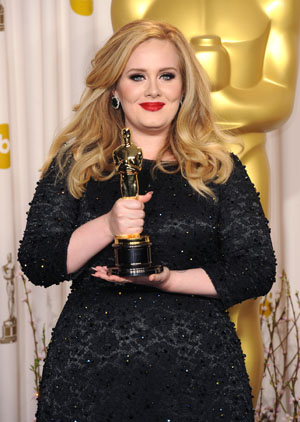 We may all be seeing Adele in a vintage-inspired wedding gown mighty soon: Us Weekly reports that the “Rolling in the Deep” singer is planning a “top-secret” wedding with partner Simon Konecki.

Konecki, of course, is the father of Adele’s 5-month-old son Angelo.

If the wedding rumor is true, it would hardly be a surprise if Adele wanted to keep her nuptials on the down-low. She’s famously secretive about her private life, refusing to reveal Angelo’s name for months, and cutting her father out of her life after he spoke about her to the press.

Nonetheless, Us Weekly quotes a source that says the wedding will happen “in the summer or fall,” and that Adele has “been planning it for a while and is very involved.”

Where would such a wedding take place? Perhaps amongst the bright lights of Adele’s native London; or perhaps in Brighton, England, the seaside beach town where Adele moved to be closer to Konecki, who has a young daughter from a previous marriage there, Us Weekly reports.

“Simon is the perfect partner and Angelo is just her life,” a pal told Us Weekly. Aww.

Adele has been quoted as saying she would never write another breakup record — 21’s heartbroken songs were supposedly inspired by a previous amour.

It was reported in August of 2012 that Konecki and Adele were already married; she denied those rumors on Twitter.

A former Eton student and investment professional, Konecki is from a rather posh background that contrasts sharply with Adele’s upbringing with a single mum in a deprived area of London.

From heartbreak to radiant love with a moneyed man, plus a child to love, it’s all rather fairy tale-ish, isn’t it?